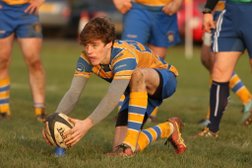 A tremendous display of defensive rugby saw OLs come through with a narrow victory over a totally committed Alcester fifteen whose repeated attacks were met with a solid OLs brick wall throughout the game.

During the first period of the match Alcester had most of the possession and were in control but on the ten minute mark OLs forced Alcester into their 22 metre area and from a number of strong forward drives the visitors were pushed back over the try line for prop forward Mike Robertson to claim the touchdown. The conversion from wide out on the left side of the field was unsuccessful and the score was 5 - 0.

Alcester responded with pressure on the home defence which resulted in a number of penalties against the OLs. One kick at goal was unsuccessful as were a couple of assaults from line outs on the 5 metre line. Eventually Alcester got another chance from an infringement in front of the posts and the penalty was converted to reduce the arrears to 2 points.

The match was developing into a game of attacking rugby from Alcester with the ball being thrown through the three’s to their wingers but great defensive rugby from OLs kept them at bay. When the home side did gain possession the full power of the three-quarters was used to good effect and on the thirty minute mark, from a period of OLs forward pressure, the ball was quickly moved along the backs to centre, Liam Wellings who, relishing the opportunity of a one on one, forced his way over the try line for OLs second score. The conversion was missed.

Alcester came right back into the game and from more pressure on the OLs defence the visitors were awarded another penalty but the attempt to convert failed. OLs finished the half under continuous pressure from their visitors but the solid fully committed home defence was equal to all that Alcester could throw at them and half time was reached with OLs having a ten points to three advantage.

The second half followed the same pattern with Alcester having the greater possession but it was OLs that scored next after five minutes of play. A successful 35 metre penalty by fly half Bradley James increased the lead to 13 – 3. Shortly after this the OLs fly half left the field with an injury.

Alcester continued to win the lion’s share of possession putting pressure on the OLs. Eventually the pressure paid off with a forward created try that was run in under the posts. The try was converted to reduce the lead to three points. The final ten minutes of the game was played out evenly with both teams creating good opportunities for open play but the defences held out to give OLs a much needed win. Alcester had to settle for a deserved losing bonus point.

The OLs, already missing a number of key injured players saw second row Joe Talamini and fly half Bradley James added to the injury list, but this was a very creditable team performance by OLs in which the defensive display throughout was outstanding.