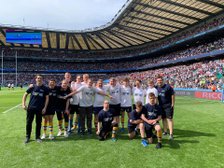 A fantastic display of Mixed Ability Rugby at Twickenham

On Saturday 1st June Old Leamingtonian Mixed Ability Team - the Hornets went to Twickenham.
They played in the Gallagher Premiership Rugby - Project Rugby Mixed ability tournament, playing team from Saracens, Bristol, Bath, Leicester and our close team Broad Street.
The friendly tournament was a fantastic demonstration of mixed ability rugby, through which everyone had the opportunity to play and develop their skills. The hornets played very well, tries were made through great team work, good communication on the pitch and a desire to play well.
Dannielle ‘Nolli’ Waterman who has previously played for England and currently plays for Wasps joined the tournament, she was very enthusiastic and encouraging of all of the players and encouraged the Hornets to enjoy the privileged opportunity to play on the pitch at Twickenham.
Everyone was excited to watch the Gallagher premiership final between Saracens and Exeter with great rugby banter between us as we were split in who we were supporting.
10 minutes before half time, the young people all stood up in unison and gathered to play on the pitch at half time, if there were nerves they didn't show it, instead they were all focused on playing together as a team and showing all in the stadium the joy they have in playing rugby.
This is what it mean't to one of the players: Thank you to everyone, I am so pleased to be part of this rugby team I thought I would never be able to play ? with my cousin or anyone else
I was scared to go and play on the pitch at Twickenham but it was the best feeling I’ve ever had
I would never of gone anywhere like this before but you all make me feel relaxed ? thank you to you Sean, Jordan and all my team mates
It really was a very special day and one which will live on in our memories for a long time.

Thank you to Akuma for the hoodies and socks they provided for the players - everyone was thrilled with them, Thank you to Wasps Community Coaches for arranging and supporting the event in particular thank you to Jordan and Sean