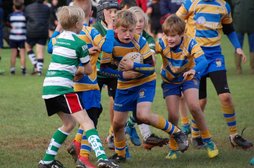 On Sunday 6th October 2019 Old Leamingtonians Rugby Club hosted yet another (11th) bonanza Rugby Festival for local Mini age groups. 68 teams from 9 different clubs had a marvellous day of tournament rugby involving all age groups from under 7’s to under 12’s.
In all there were around 700 players supported by an army of 70+ volunteers who very successfully managed the Car Parking, Catering, Marshalling and Refereeing at the Crofts on Bericote Road.
The rugby was run under the RFU core values of teamwork, respect, enjoyment, discipline and sportsmanship and was incredibly well supported by local businesses as well as Premiership Club Wasps who sent along two of their players, Sam Wolstenholme and Ben Morris. The Wasps players visited every pitch, talked to players and gave them real encouragement to support the game into the future.
At least 8 players from the OLs 1st XV were also engaged in spreading the rugby gospel across the whole of the Crofts domain and their contribution was much appreciated by players and parents alike.
A raffle with gifts donated by local businesses such as a signed Lions shirt, a Wasps shirt signed by all the team and Wasps match day tickets plus many other entertainment prizes raised £1000 which will be used to invest in the development of mini and junior players to assist them in making the transition to senior rugby.
The catering operation run by the volunteers served breakfasts and after that bacon and sausage burgers and tea and coffee all day. The weather was gentle autumnal sunshine for the whole of the tournament and all of the logistics ran smoothly.
OLRFC Mini and Junior Rugby Chairman, Lucas Wager, wanted to say a big thank you to everyone involved. He added that it had been a fantastic day of rugby sponsored and supported by local businesses and sports clubs and that every single child, parent, coach, volunteer and visitor went away with a smile on their face.
The club is indebted to their major sponsors for the day which included, Wasps, Akuma, Cassidy Group, The Warwickshire, Oliver Wealth Management, Arrundale Financial Planning and TF+S Solicitors.
4 Photographs with permission to reproduce
Photos here