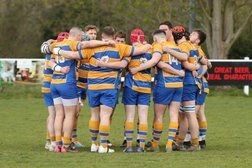 Old Leams had to settle for a four try bonus point after losing to Coventry Welsh for the second time this season.

From the kick off the visitors took the game to OL’s and it was only strong defence that kept them at bay for the first twelve minutes of the match before Coventry Welsh opened the scoring with a converted try. From the restart OL’s stepped up a gear and only four minutes later scored the first home try when a flowing 15 man move saw centre Tom Eales finish the move. The try was unconverted . The game continued with OL’s in the driving seat and good forward play coupled with strong running kept Coventry Welsh on the defensive but the defence was broken twice more before half time with tries by Liam Wellings and prop Kai Cott. Neither score was converted but OL’s approached half time with a lead of 15 points to 7, but on the final play of the half Coventry Welsh forwards pushed OL’s back into defence and forced the ball over for a second unconverted try.
The second half was predominantly Coventry Welsh with OL’s defending desperately but from a break out from defence through good forward play and strong three-quarters interchange play an end to end move saw fly half Bradley James cut through the visitors defence to touch down between the posts. The try was unconverted.
The match turned on the 15 minute point of the second half when the match official yellow carded two OL’s players for separate rucking infringements, the second resulting in a penalty try which seemed extremely harsh from an infringement just inside the home 22 metre area, but it turned the game and with OL’s reduced to 13 men Coventry Welsh took full advantage to run in two more tries. One of which was converted to give a final score of 31 points to 20.
The next game is versus top of the table Ledbury at Ledbury – kick off 3.00pm.
Share via
FacebookTwitter
https://www.pitchero.com/clubs
Recent news