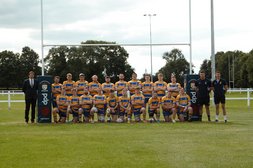 OLs returned to their winning ways with a comprehensive victory against Woodrush, scoring six first half and five second half tries in a flowing game of fifteen man rugby. Woodrush competed well and scored three converted tries but could not match the speed and open play of OLs that saw forwards and backs combining well throughout. The game kicked off on a cold but dry day and the first quarter of the match saw the sides equally competing but it was OLs that drew first blood after 15 minutes of play when good possession by the forwards saw Woodrush driven back over the goal line for the first try of the game. This appeared to give impetus to OLs and for the remaining three-quarters they began to get more into the game and it wasn’t long before a sweeping move that began in the OLs' 22 metre area saw Henry Reynolds receive the ball inside his own half of the field and cut through the receding defence to touch down try number two. A third try quickly followed when good forward pressure resulted in scrum half Toby Lord quickly freeing up and in a fast moving period of play fullback Calum Semple provided the overlap to complete the move with try number three.
The match continued with Woodrush competing mainly off the back foot absorbing OLs' pressure but on the 37 minute mark the Woodrush forwards created good ground and space and when a defensive slip by OLs saw the ball given away inside the home 22 metre area, which Woodrush took full advantage of, and scored a try between the posts. The conversion followed. The match evened out for a period with play concentrated in the middle of the field but just before the half time whistle two more OLs tries were scored, the first by winger Liam Wellings on his return to the side after injury, and the second by back row Adam Stannard. All six conversion attempts by OLs were missed but half time was reached with OLs having a 30 points to seven lead.
The second half followed the same pattern as the first with OLs dominating play but finding the Woodrush defence competing well, however, the OLs pressure was beginning to cause problems for the Woodrush forwards creating scoring opportunities for the home side, some of which went begging, but 10 minutes into the half number 8 Callum Gosse collected the ball from the back of a ruck and broke through the home defence to score try number seven. The conversion was missed. Woodrush again came back into the game and from a break out of defence ran through the retreating OLs defences to touch down for a second converted try. This again spurred OLs into action and from the kick off Woodrush failed to gather the ball conceding it to the quicker hone side and the ball was quickly passed along the three-quarters for Liam Wellings to charge through the visiting defence to touch down for his second try of the game. This try was converted by Bradley James who had come into game as a substitute at half time.
Woodrush continued to compete well and were rewarded with a third converted try following a period of pressure on the OLs defence but is was OLs that completed the match with almost total possession for the last fifteen minutes during which Callum Gosse touched down try number nine, Centre Ciaran O’Connor touched down try number ten, and finally Henry Reynolds scored his second try of the match for try number 11. All three tries were converted to reach the end of the game score at 63 points to 21.
This was another all round team performance with the OLs' back row forwards having a dominating game both in attack and defence. It keeps OLs in second place in the league on the same points as Ledbury who have won more game than OLs.