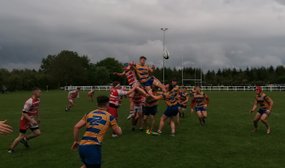 A better day, despite the monsoon

More rain, sun and rain..... Must be near the end of the season

OLs Colts, captained by Ben Edwards, took on a physical Claverdon team on Saturday, Old Leams Colts went out to dominate game from the start with big tackles ensuring that the ball was firmly in our control. Scoring twice in the first 7 minutes by empowering runs from prop Charlie Thwaites and Dan McCarthy ( debuting on the wing to allow Sam Warne a start at No 10). Ben Wilson, back to kicking form, added both the extras. 14:0.

The next 2 quarters of the game became a little more dogged down with poor discipline and a high penalty count on both sides. Undeterred by that, OLs held on and put the tackles in where needed to keep Claverdon away from the goal line.

OLs third try came as the game entered the last quarter, Sean Lafferty, an U16 with his first run out at as a colt.

Minutes later Claverdon responded with a try of there own, breaking down the OLs defence. Neither try was converted 19:5

Despite Claverdon's heavy hitters they didn't manage to get back over the tryline for the remainder of the match with Archie Walsh giving a masterclass on tackling.

The icing on the cake for OLs was a try in the dying minutes from Paddy Grace and a conversion from a Ben Wilson drop kick.

This was a testy game but (virtual) handshakes after the end whistle showcase the spirit of rugby union. None more so than when Archie Walshe's nemesis from Claverdon congratulated him on his tackle ( 'I have never been hit like that before') . Claverdon can hold their heads up high from this encounter.

Another special mention goes to U16 Matty Rome (replacing his brother on the wing) for his Colts debut.
Thanks to all involved; the kitchen staff, physio, U16s, the committee, the groundsmen, coaches, bar staff, guys who work (not so) silently behind the scenes, the players and the injured supporters.

Leamington Away next Friday (21st) at 7pm
666 touch tournament Sat 22nd.
3rd place playoff - against Barkers or Sils , home at the Crofts, 7pm Fri 28th May