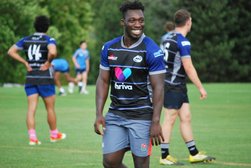 2016 Trinity School leaver, Gabriel Ibitoye, has been included in England head coach Eddie Jones's 44-man pre-season training squad. We hope that Gabriel impresses whilst away with the squad from Saturday 4 August until Monday 6 August so that he is in contention for a spot in the squad when the Autumn internationals come around!