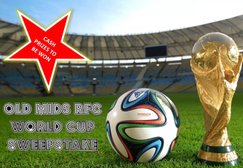 Its that time again...The Football World Cup which also means an OMWRFC sweepstake!

In our sweepstake everyone has not only a mathematical chance of winning the whole thing but also each ticket that will very probably still be in there with a chance up to, certainly, quarter finals and, very likely, the semis.

The Rules
• There will be a maximum of 3,864 tickets – all unique.
• To maximise the chances of all tickets being equally fair certain steps have been taken in the planning of the sweepstake:
o Teams in each group have been ranked according to the World Rankings (28 March 2018)
o Each ticket will name 4 teams, one from each ranking level within the pools: Every ticket will contain one of the 1st ranked teams, one of the 2nd ranked teams and so on.
o For example a ticket might contain Germany (rank 1, Group F), England (rank 2, Group G), Iceland (rank 3, Group D) and Japan (rank 4, Group H)
o Only two teams can qualify from each pool. Therefore, there is a maximum of two teams from any pool on each ticket so that at the beginning of the tournament, each ticket will have the same chance of being the perfect ticket.
• As teams leave the tournament they will receive a score commensurate with their success in the tournament. The points will be awarded as follows:
o The 8 teams that finish 4th in their group will be awarded the same points as they achieved in their group (usually between 1 and 4 points)
o The 8 teams that finish 3rd in their group will be awarded 3 points for finishing third plus the points earned in their group.
o All four losing quarter finalists will score 15 points
o 4th place will score 18
o 3rd will score 22
o 2nd will score 26
o 1st will score 30
• As the pools are completed sweepstake players will receive regular scoring information.
• At the end of the tournament the total score for each ticket will be calculated. And the ticket with the highest total score will win.
• Prize money will equal 40% of stake money received. The sweepstake winner will receive 50% of the prize money. 2nd place will receive 33% of the prize money. 3rd place will receive 17% of the prize money.
• It is hoped that the scoring system will provide enough differentiation to keep to a minimum the chances of tickets tying. If there are ties then the relevant amount of prize money will be amalgamated and shared.

Buying Tickets
• Tickets will cost £2 each, 3 for £5, 7 for £10 or 15 for £20.
• Depending on the number of single tickets sold a sell-out of all tickets will raise between £800 and £1200 so prizes will be significant and chances of winning greater than in a number of other ways of having a flutter (in our last attempt at this the winner won over £170.
• Since there are a finite number of tickets we cannot give large numbers to ‘salesmen’ as one might in a raffle where there are limitless tickets. Tickets will be randomly allocated and sent to the purchaser, preferably by email, as soon as your purchase is notified to the organiser, Graham Crouch.
• There is no limit to the number of tickets you can buy until the last ticket is sold. A warning will be sent by email and on the website when that is approaching. Anyone who should be unlucky enough to pay for a ticket after the last one has been allocated will have his/her money returned ASAP.

How to buy tickets
• The easiest way is to use internet banking to transfer your money to the OMWRFC Socials account using as a reference your surname and initial followed by sweep e.g GCrouch Sweep? This reference is vital if we are to allocate your tickets.
a/c number: 00155527 sort code: 202461
• Alternatively, there will also be a number of players at The Club to make face-to-face sales especially at the AGM. You will be asked to fill in a line of a form – a bit like a sponsor form – listing your name, mobile number, the amount paid and your email address for allocation of tickets.
• Finally, if neither of the above preferred methods works for you, you could send a cheque for the relevant amount made payable to OMWRFC to (probably best to email as well to get in sufficiently early):
G Crouch
20 The Woodfields
Sanderstead
Surrey
CR2 0HE
gcrouch49@gmail.com