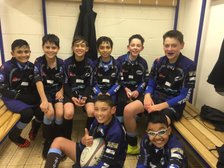 Young Mids show grit and determination up until the final whistle

The Wombles of Wimbledonians had been well drilled by Great Uncle Bulgaria in recycling ruck balls!

Well done boys- not giving up and your determination against a difficult opposition. We are all very proud of you.
Claudio, Assistant Coach U12s

The rain and wind had made an unwelcome return to Lime Meadow Avenue on Sunday, when the U12 Young Mids played host to Wimbledonians in the Surrey Cup Semi-Final clash.

The Young Mids, missing a couple of key players due to unavailability, but gaining one new player to the team, Toby, chose to kick off the match under the captaincy of Dylan.

It was obvious from the kick off, that this Wimbledonains 'B' team was a strong, well drilled team, proficient in counter-rucking, and possessing three very strong ball carriers. This resulted in five tries being run in during the first half, with no response from the Young Mids. However, the grit and determination from the Young Mids, namely Dan, Niam and Alex putting in some sterling tackling against players almost twice their size, was testimony to the teamwork and strong bond they boys have with each other, both on and off the field.

At the half-time break the boys discussed amongst themselves how they could adjust their tactics to suit their style of play and negate the Wimbledonians hard rucking and ball carrying prowess, and came out with a renewed determination for the second half.

The tactics seemed to be paying off as the Young Mids recycled their good fortune and ran in three tries, with Joseph, Archie and Dylan scoring after multiple phases of play, showcasing the teamwork of the players and how well they gel together., reducing the scoreline to 3-5. Orlando was unlucky to have a further two tries disallowed during this period of play.

With their backs up against the wall, and getting flustered, Wimbledonians made some substitutions, and turned their fortune around again, running in four tries in the last seven minutes, to push the final score up to 3-9.

The U12 Young Mids now play in the Bronze Final against Barnes RFC on Sunday 14th April at the Junior Surrey Cup Finals Day being held at Esher.