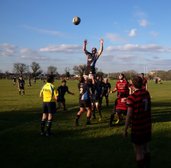 Despite a lively first ninety seconds, Mids were quickly 7-0 down having been caught in confusion when conceding an early penalty against a team which had put in a strong performance to take the points at Sanderstead before Christmas.

Did anyone feel that they must have felt that they were fated to play second fiddle again?

How things change! A magnificent display of forward domination and scintillating running turned this into the visitors’ best performance of the season. The scrum, with prop Jacques Bryant again impressive and second rows Mark Handley and Matt Shillabeer driving a powerful unit, soon got on top and forced their way over the home line for No.8 George Daniels to get the touch down. Daniels and Handley were dominating the lineout and half backs David Stanton and Dan Crouch had a cornucopia of opportunities to set their line going. Centres Andy Dean and Matt Shields were in sparkling form and wingers Marc McEvilly and Tom Webster were able to run aggressively with quick ball and space in which to perform. This enabled Mids to secure the try bonus point in the first period and avoid the second half shakes which have left the bonus point cupboard relatively bare this season.

Despite the 24-7 advantage, the first fifteen minutes or so of the second half were typically barren. Amplefordians staged a rally that forced Mids into conceding the odd penalty and get pinned in their own half. However, the Mids defended stoutly and set piece dominance always gave a chance to regain possession. The home side were a bit short of bench depth and the longer the half continued, the more obvious it was that Mids were retightening the screw. When the next try came, the dam burst and scores came at regular intervals with Dean and Shields and Webster all registering and McEvilly bagging a brace. The threat from the wing position was constant and Mids kept the ball on the move constantly. Full back John Bocking added his name to the list and Handley profited from a second pushover.

Amplefordians were shell shocked and suffered two yellow cards. Mids’ hooker Tim Jupp produced the turnover of the day and Crouch showed no mercy from the kicking tee, converting seven of the nine tries scored – one of the misses hitting the post.

Mids have moved to second in the table and if they can reproduce this form in their remaining games must fancy their chances of promotion.