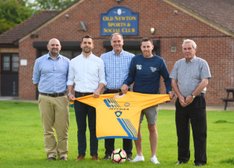 Stuart Ager has been involved at the Suffolk & Ipswich club for more than 25 years and is looking ahead to the new season with relish, convinced the club can buck the trend some non-league clubs are facing, of being in decline.

“I hear too many people moan about the modern day footballer and while some of it can’t be ignored I am a firm believer that we need to listen and work with the players,” Ager said.

“Part of my key objectives is to ensure we have a local connection of committee members and several ex-players have already become involved and given valuable ideas and input to the club and I am going to add some more people to an established committee.”

Ager takes over as chairman from Dave Shave who, after 25 years service has overseen Old Newton becoming an established and well-respected club.

“Dave will remain a key part going forward in another role and I will be leaning on him heavily,” Ager admitted.

Now in Division One, Old Newton also have a new management team on board for next season after 11 successful campaigns under Colin Macrow.

“Colin has become the most successful manager in our history by winning Division 1, the Junior Cup and Senior League,” Ager said.

“His efforts, dedication and leadership can only be described as monumental but after relegation back into division 1 we have found winning ways harder to come by and we mutually agreed that a fresh change was needed.

“The management team for next season is Macca McConnell, who will manage the first team in Division 1, and Nibby Whomes, assisted by Adam Barton, will manage the Reserves in Intermediate A.”

All three have strong connections with the club having played there for several seasons.

“We have fantastic facilities that are being improved before and it’s key we improve the player’s morale and perception of the club, as last season we narrowly avoided relegation, ” Ager added.

“The projects we have planned are exciting. But making us good off the pitch is one thing, becoming more competitive on the pitch is essential.”