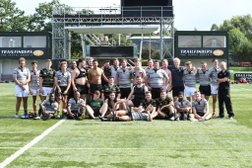 The OPs were welcomed to Ealing Trailfinders on Saturday for the first preseason game of the 2019-20 season. It was an occasion that saw the new Ealing men's side launch ahead of their entry into the league system.

Both sides had large squads of approx 35 players each, all due to contribute to a 4x20min fixture. With many senior OPs injured or unavailable it was great to see such a turnout from the squad, including nine recent leavers who received their A Level results just 48 hours before. The first 20mins was a scrappy, error ridden affair. Plenty of scrums kept the ball largely in the middle of the field with OPs struggling to find much rhythm. Three changes in the second quarter added a bit of zip to the OP play, at a time when the away side were just starting to find some continuity and look a bit more dangerous. There were two tries before half time, one for debutant Morgan Lumby following an outstanding pass by Will Taylor, and one for the impressive Conor Dolan.

Both sides made plenty of changes at half time, with OPs bringing on some of their younger contingent. Ealing fought back, putting some pressure on the OPs but were kept out by excellent Paul Webb and Josh Chippendale defence. Eventually the home side scored from a cross field kick that bounced kindly to the scorer. 5-12. Following some Ealing pressure, an error in midfield was collected superbly by Webb who sprinted 70m to increase the OP lead. The back and forth third quarter saw Ealing score their second try to make it 10-19.

In the final quarter the OPs pulled away with two fine tries. Both were sparked by Barney Wellings breaks and great support play. The first try was scored by debutant Mo Akbar after a number of excellent offloads. The final try was similar, Barney scorching through the middle, supported by Carlos Gomez Rose who offloaded to debutant James Young to show his speed and race in for the try.

It was a great day for the club as a whole, especially having so many new and young players not just representing the club but also really impressing. Rufus Polak took a head knock inside the first two minutes but the rest of the afternoon saw the club come through with no major injuries which is also a bonus. From a performance perspective, there were moments but clearly there is still plenty to work on - preseason is always a scrappy affair and things will improve with time.