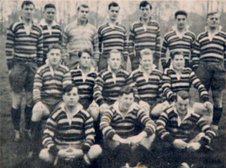 Old Walcountians RFC were formed in 1932 by former boys of Wallington County Grammar School, five years after the formation of the school.

Few records are held of our pre-war history when we were based in Beddington Park. After the war we moved to Nicholas Road, then after a difficult period which included destruction by fire of our pavilion we moved to our present home in Woodmansterne.

One of our most successful seasons was in 1958/59 when we were unbeaten. Our captain Tony Jones, was one of a number of schoolboy internationals produced under the guidance of our former president Bill Ireland who taught rugby at the school for over 40 years.

In the spring of 2002, OWRFC embarked on an experimental and radical new way of running the club. Surrounded by clubs going to the wall, others with ever diminishing numbers, OWRFC decided that drastic action was required to halt the seemingly endless malaise that afflicts so many clubs of similar standing. To that end, the club committee structures were dissolved and replaced with a management group of five individuals.

We now run three regular teams which cater for players of all standards and the U21’s squad, so why not get in touch and come along and join us.