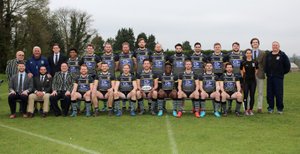 Old Walcountians ended the 2018-19 season with some silverware as they saw off a feisty challenge from Old Freemen’s in the Surrey Shield final at Esher RFC.

The two wins Walcountians had over Freemen’s in the League counted for little as Freemen’s started the match more positively and pushed Walcountians into defending their own line with some solid play in both forwards and backs. It was Freemen’s who took the lead in the fourth minute with a penalty and, although Walcountians full-back Ross Norton levelled the score with a well-struck penalty in the 11th minute, Walcountians continued to be under the cosh and, 13 minutes into the match, Freemen’s retook the lead with a try after recycling the ball from a ruck close to the Walcountians’ line.

However, as the first half continued, it was Walcountians which increasingly got the lions’ share of the ball through their pack while, behind the scrum, half-backs Harry Wrightson and Seb Chmielinski started to get the backline going. 28 minutes into the first half, Walcountians narrowed the lead when skipper Will Thornton crashed over for a try from short range.

By half-time, Walcountians were in front. Mobile prop Jonny Evans charged down the right flank and put winger Marvin Fletcher-Rogers in for a try.

Walcountians wasted little time in increasing their lead in the second half as it took just two minutes for them to make the concluding score. The pack recycle the ball from a ruck close to the Freemen’s 22 metre line and the backs shipped the ball out to Marvin Fletcher-Rogers to run in his second try of the day.