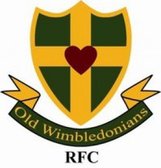 A vital losing bonus point secured at the death!

We scored 3 tries against one of the favourites for the league. Ultimately we managed to salvage a bonus point with a try in the corner from Aidan O'Brien.

With the game over we had a kick into the wind from the touchline to get within 7 points and at least get something from the game. Up stepped Jason Murphy who was arguably our best player on the day and despite some unmannerly and very disappointing shouting from a couple of the opposition as they charged the kick, aimed at putting him off, the ball sailed through the uprights.