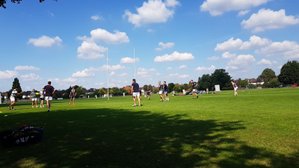 Plenty to look forward to this summer at the OWRFC

We’re excited to announce that the build-up to the 2019/20 rugby season begins on Tuesday, June 4, 2019, with the first touch rugby session of the summer at the Old Wimbledonians club house on Somerset Avenue in Raynes Park.

These informal no-contact sessions are open to all ages (16 and above) and abilities, and are used as a fun way to keep fit over the summer while throwing a rugby ball around with your mates. There will no doubt be a few beers on the patio in the sun after each session as well.

Current, new, and past players alike are all welcome, and please feel free to invite any friends along too – it’s always a case of ‘the more the merrier’ at the OWs. Arrive at 7pm for a 7:30pm kick-off, and don’t hesitate to spread the word. These sessions will continue every Tuesday moving forward.

As it does each year, touch rugby will be used to gently build towards formal pre-season training, which will begin in August, ahead of a huge challenge in Surrey League 2 this coming season.

Below are some other key dates to keep an eye on over the summer, all taking place at the OWRFC club house, including our annual summer BBQ at the end of June. We’ll be playing a game of touch the morning of the BBQ, then cheering our First XI cricket team on in the afternoon with some beers in the sun, so everyone is encouraged to invite family and friends as well.

For anyone looking for a new rugby club in 2019/20, or just looking to keep active over the summer, the OWRFC is a sociable, community-driven, all-ages rugby club based in Raynes Park, South West London. We’re currently seeking new players for our First XV squad and for our junior section, the Old Wimbledonian Warriors. There are also sections of the Old Wimbledonians for football and cricket, both always keen to see some new faces.

Come along for a game of touch one Tuesday evening this summer to get a feel for the club, or get in touch with First XV Captain James Howell at Howell_9@hotmail.co.uk

We’re also looking forward to welcoming the current members of the OWRFC squad back after a well-deserved break, as well as a fantastic recent effort from a select few down at Bournemouth 7s at the end of May.