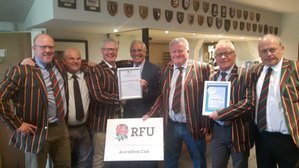 MASSIVE NEWS A GREAT ACCOLADE FOR THE CLUB
Last season the Warriors and our senior section have worked extremely hard to secure RFU Accreditation
As a club we are immensely proud and we thank Brendan Byrne and David Doran for the time and effort they have put in with the Penny our local Rugby Development Officer (RDO). We also thank Rob Byrne for his wise counsel throughout the process
The Club was presented formally with its accreditation by the President of Surrey RFU (and KCSOB) Darryl Druckman

The highlight of 2018 was our 6 game Cup run in the RFU National Junior Vase where following a trip across to the Isle of Wight and another away trip where we could see the Isle of Wight! We reached the London and South East Divisional Final, unfortunately we lost against our pals from Chipstead RFC.
It was pleasing that, whist we are a proudly open club who welcome all comers, we fielded on average 12/18 OWs in our side, (on 1 occasion 16/18 were OWs), it was also fantastic that 7 of players had graduated from our Warriors and were still U20.
On the social front we had 2 VP Lunches in 2018 (last game of season and 1st game of this season) with over 70+ attending both of them and inaugural Past Players Lunch when 40 (many not VPs) sat down.
We have our usual supporter’s lunches before all our other Home games. The players had an End of season meals at the clubhouse. We also had a successful end of season tour to Rimini.
We look forward to our annual Christmas Lunch and our social activities remain vibrant.
The start of this season has been challenging, although we started well with a win v Chipstead, avenging the defeat in the final and have 2 losing bonus points in close losses. We have been hugely hit by injury to key players; particularly in the backs (even Mike Ellis who moved to the US over the summer broke his foot over there!) The most recent being season ending serious knee injury to our fly half Lewis (he was operated on at St Georges by the wife of an OW!)
As always the committee will roll our sleeves up and work hard as a collective and support Rory Southgate who does a monumental job for us every week, to get the best team we can out there on Saturdays.

We launched a new website www.oldwimbledoniansrfc.com and our twitter feed @OldWimRFC now has 593 followers, both are updated regularly with OWRFC and Warriors news as it happens!
We have also launched an Instagram account Old_Wim¬¬_RFC which is a work in progress (i.e. when I work out how to use it properly I will!)

Our Juniors, the Warriors, have gone from strength to strength with sides from U5-U18 and a membership of 450 families. The membership come from many different schools, but is firmly built on the foundations of both Donhead and Wimbledon College. We are inclusive and cater for players of all abilities and aptitudes. We have had a great deal of success on and off the field, both collectively and individually, contesting with the top teams in Surrey and with players representing the Club in both Surrey and Harlequins development and elite squads.

Warriors city Lunch: The social highlight of the year was our Warriors “City Lunch with 4 British Lions” (Bob Hiller, Fergus Slattery, Brian Moore and Rob Henderson) which was brilliantly organised by Willie Burke and his team of volunteers and attended by many current and past players, sponsors, Warrior parents, wider community and friends of the club. It raised a huge amount and will really help the Warriors bursary fund for any player who otherwise couldn’t afford to be a member of the club.

The Warriors were also instrumental in the push for the Aviva Community Funding which will go to the refurbishment of the present toilets and creation of a much needed disabled toilet.