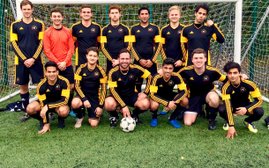 A stunning true story of team spirit, top knots and going top of the league...

Who could sadly not be with us on this day...

Extreme wide of the British countryside horizon as a cold wind rustles the imperious, autumnal trees.

Close-up on a single reddish-brownish-yellow leaf as it floats to the green below. However, the green is not grass as we know it, but the eternal immaculacy of an artificial 3G astro-turf football pitch.

Suddenly a football rolls over the fallen leaf in the foreground, swiftly pursued by a procession of stampeding feet.

A wide reveals the Saturday morning ritual of local school kids playing 7-a-side -- an image of unbridled innocence. But make no mistake... a storm is brewing...

Close-up on the embroidered emblem of a lamb upholding a gold, black and maroon flag with OMTAFC embossed below.

A group of privately-educated young men (some better-looking than others) gear up for the match ahead. We will come to know their names soon...

OLLIE is followed by another...

TOBY (20s, HULKING, GINGER) is as always, a bundle of energy as he greets everyone.

Amidst the tumult, a distinguished blond man stands up.

OLLIE (MOCK-INNOCENCE)
I had a quiet night in.

SEAN
Not according to Katz’s Snapchat
story...

SEAN produces his phone and shows the said video to OLLIE whose eyes widen sheepishly -- we do not see what is on screen.

The departing children look up in awe as the OMT players, resplendent in their Adidas training gear, take to the expansive arena.

SLO-MO -- a practice corner is taken with immaculate technique by...
GUY RITCHIE STYLE FREEZE FRAME -- OWEN ‘TEKKERS’ KEATING. The ball curls beautifully... into the side netting of the
goal. OWEN (20s, LUKE-SHAW LOOK-ALIKE, POSSIBLE GOALKEEPER) shakes his head in annoyance.

TOBY (BALL AT FEET)
Rondo lads! Form a circle. Let’s do a Rondo!

A pregnant silence. Skeptical looks from some quarters -- perhaps ignorant to this term ‘Rondo’.

The silence is broken by the Oxonian vocal chords of a striking figure...

JASON
No lads, let’s jog across the pitch.

Gates are opened and closed. Glutei Maximi are stretched. Lunges are lunged.

The ball is zipped around in a competitive mini-game of ‘keep ball’.

INT. WROTHAM SCHOOL FOOTBALL PITCH - MIDDAY
The two teams have now assumed their formations on the pitch. The OMT lads have taken off their ‘stash’ to reveal a sleek
black & yellow, long-sleeved kit.

The REFEREE (AUTHORITATIVE, EGALITARIAN) blows his whistle and Tonbridge get the match underway.

The early exchanges are cagey at best. Tonbridge players pass the ball around at the back with confidence but are unable to penetrate OMT’s rigid and disciplined shape.

A Tonbridgian long ball (the first of many) is pinged up towards one of their forwards only to be headed away imperiously by a dashing OMT head...
GUY RITCHIE STYLE FREEZE FRAME -- JONO ‘BRUTUS’ PHILLIPS. JONO (20s, HANDSOME, WHOLESOME WITH A CAPACITY FOR MUTINY) lands on his feet and urges his comrades on.

Around a quarter of an hour into the half, OMT earn a free kick on the right hand side. SEAN wraps his right foot around the ball and swings in a delightful ball which lands on the head of a flying Indian...

ASH (30s, ENGAGED, GREEN EYES) gets great contact on the ball but it just loops over onto the roof of the Tonbridge net.

The OMT lads swiftly regroup and solidify their structure like a well-drilled army battalion.

The half goes on and OMT grab a greater and greater foothold in proceedings.

Then... a ball from the back drops towards a heroic figure on the OMT left flank...

A lens flare effect as ASH’s green eyes glint. He expertly cushions the ball down and plays a beautifully weighted through ball.

PAUL races in on goal at a slight angle.

PAUL obliges and hits a Theo Walcott-esque strike across the Tonbridgian goalkeeper to make it 1-0 to OMTAFC.

Rejoin the action as JASON rings the changes. ASH and OLLIE are now joined in midfield by a more insidious character...

TOM (AGE UNKNOWN, VILLAINOUS) is immediately in on the action, bringing the ball under his spell with an elegance that belies his criminal past and linking up well within the midfield triumvirate.

Tonbridge continue to take a direct, aerial route in their bid to break OMT resolve as the half draws to a close.

On the stroke of half time, TONBRIDGE NO.7 is for once allowed time outside the OMT box and gets a good strike off. Follow the ball as it whistles towards the top corner. A valiant gloved hand appears and gets an agonising touch before it hits the back of the net. 1-1.

LEWIS (20s, VOCAL) cuts a forlorn figure; a sentiment echoed on the vexed faces of the OMT players -- a sucker punch.

The REFEREE blows the half time whistle.

The OMT players are gathered around a pile of their water bottles, energy drinks and ‘stash’ -- the half time huddle.

JASON
Our shape has been fantastic! They’ve barely had a sniff.

ASH
Keep playing our stuff and the chances will come.

OLLIE
Have we run out of things to say?

The REFEREE blows his whistle to commence the second half which picks up where the first left off as both sides exchange spells of possession.

Tackles, interceptions and blocks fly in from both teams. Neat play down the right as SEAN feeds the dynamo winger ahead of him...

GUY RITCHIE STYLE FREEZE FRAME -- RUSHIL ‘ROOSH’ MALDE. RUSHIL (20s, RAW) bamboozles his opposite number with his
footwork and guile, but the finishing touch is all that’s lacking in OMT’s impressive approach play.

Close-up on the REFEREE’s watch as the minutes tick on.

Another speculative Tonbridgian long ball finds its way over the top of the OMT back-line.

TOBY shepherds the ball back to an onrushing LEWIS who bounds across the plastic turf like a racer snake chasing a baby iguana.

LEWIS reaches the ball and raises is leg with assurance to cushion a pass out to TOBY to relaunch an OMT attack. But in a shocking turn of events akin to the subsequent US Presidential election, the ball evades LEWIS’ cocksure boot, giving the TONBRIDGE STRIKER a chance to race through on an open goal.

TOBY (UNDER HIS BREATH) Not today, lad.

TOBY shifts his weight to block the run of TONBRIDGE STRIKER who goes down appealing for a decision.
REFEREE blows his whistle. The moment hangs.

A collective OMT sigh of relief as REFEREE’s finger indicates a free-kick just outside the area.

TONBRIDGE NO.7 lines up the set piece.

LEWIS arranges his wall with his usual governance. A moment as the pitch falls silent.
TONBRIDGE NO.7 curls the ball over the wall.

Slo-mo as LEWIS dives to his left and palms the ball away for a corner -- ‘one for the cameras’, as one might say in football vernacular.

Up the other end, PAUL links up well with his new partner in crime down the left...
GUY RITCHIE STYLE FREEZE FRAME -- CHRIS ‘MARRIED’ WALTERS. CHRIS (late 20s, RANGY), having just recently walked down the aisle, faced the equally daunting task of playing at left back for the first time in his life. He rises to the occasion with the assurance of a seasoned pro.

Israel meets India, as JASON and RUSHIL combine on the right to provide an enticing delivery into the box.

Stunt -- SHIL attempts a spectacular bicycle kick. Suspended in the ether, he makes good contact with the ball which unfortunately flies the wrong side of the post.

A sweep amongst the faces of OMT players as the full time whistle looms. All are thinking similar things...

We need the three points here.

I haven’t trekked this far beyond Zone 6 for a stalemate!

JASON sits at his desk, fervently switching between Facebook and Pitchero against his screensaver of Emily Ratajkowski draped in the Nigerian flag.

JASON’s attention is drawn away from Saturday’s Pitchero Availability by a blonde scouse secretary walking the corridor before him...

EXT. WROTHAM SCHOOL FOOTBALL PITCH - AFTERNOON JASON snaps back to reality.
JASON (TO HIMSELF) Head in the game Kasler.

... and in the game it was. CHRIS clips a delicate ball up the left flank to JASON, who controls, turns and releases in a motion as fluid as the red wine he was to consume later that evening.

The ball is perfectly weighted for the on-rushing PAUL, who wins the foot-race with his Tonbridgian adversary and bears down on goal.

PAUL enters the box and harnessing the muscle memory imprinted in his mind from his previous goal, he once again strikes the ball low and true across the goalkeeper into the far corner. 2-1.

Celebrations of passionate restraint from the OMT players -- now is a time for professionalism.

Tonbridge must now go for broke.

Their robust, direct style of play cranks up a notch but SEAN, OWEN, TOBY, JONO and CHRIS are equal to everything thrown at them.

TOM, ASH, OLLIE and SHIL scrap away like beavers in midfield.

PAUL, JASON and RUSH press the opposition and run the clock down to the best of their considerable abilities.

A final last ditch block from a combination of LEWIS, OWEN and JONO yields a corner for Tonbridge in the dying moments -- a notorious Achilles heel for the OMT.

The ball is floated in but today is a day for heroes and it is met by an OMT head and cleared to safety.

At last the REFEREE decides to bring an end to this Titanic tussle and sounds his metal whistle for a final time. The sharp screech rings out and is duly followed by victory cries.

JASON (CLENCHES STAR OF DAVID AROUND HIS NECK)

A customary ‘three cheers for...’ chant precedes handshakes all round between OMT and their Tonbridgian adversaries -- an air of mutual respect.

Back in the OMT team huddle, there is a clear buzz from the victory.

JASON One of our best performances.

JASON Could you take a team photo for us mate?

The squad line up:

CHRIS assumes his ‘waiting at the altar’ pose. LEWIS and JONO share a joke.

OWEN shoots the type of winning smile only a Luke Shaw look-a- like could pull off.

OLLIE steps in front of OWEN and furiously adjusts his hair

TOM rises up like a cobra to a snake charmer -- his ears pricking up to the sound of police sirens in the distance.

JASON kneels down in his central spot, a manoeuvre that would result in an emergency MRI scan two days later.

SEAN brings the diminutive figures of RUSHIL and PAUL close at either side - a pertinent colonial image.

TONBRIDGIAN SUPPORTER frames up the squad and clicks the photo.

Under the resulting still image of the OMTAFC we see a final...