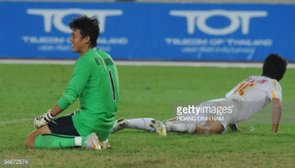 Taylors’ rolled into this one not quite knowing what to expect, with their opponents, Old Sennockians, coming into the season following a relegation from Division 2. Despite the dodgy shirts (rookie Sunday League red, questionable estate agent sponsorship), what they found was a well-drilled side who play the percentages well.

That said, it wasn’t as if Sennockians showed any great footballing talent. Rather, it was the state of the pitch that effectively decided the tie, it’s ludicrously tiny dimensions and pothole-y surface favouring the physicality and brutality of Sennockians over the art and artifice for which OMT have become known.

Despite that, OMT started the match very strongly. Inside 2 minutes, the ball was played in behind for Raschid to chase. Our panther-like winger took it past the wingback without any fuss, before being hacked down from behind as he entered the box. The ensuing penalty was duly converted and Taylors’ went one up.

Thereafter, things rapidly went downhill. It became apparent that there would be no football played here today, as Sennockians overloaded the midfield and took every opportunity they could to leave the boot in and slow the game.

Their speciality, it turned out, was long throw-ins. And with the edge of the penalty area about a yard from the edge of the pitch, it didn’t take much to sling the ball right into the gullet of the 6-yard box whenever they fancied. As was inevitable, one such occasion brought the first goal: the ball was tossed up, the wind caught it at precisely the wrong moment, and it glanced off Phillips’s head into the net.

The second was scrappier, if that is indeed possible, and no more deserved. A corner broke to a Sennockians player at the back post; the ball was hacked back into the danger area, and Carter sliced the ball into his own goal.

This was all in the first half, and though the away side threw the kitchen sink at it in the second 45 minutes (most notably: Samani hitting the underside of the bar with a sparkling effort from 30 yards), they were unable to get back into the game. Two own goals ended up sealing OMT’s fate in a most miserable away day.

A fine effort though it was from OMT, they nonetheless failed to find a place in football’s history books. Back in 2012, Brighton actually scored three own goals against Liverpool in an FA Cup match. Worse than that, the hapless Germinal Ekeren defender Stan van den Buijs scored all three of Anderlecht's goals in their 3-2 win in 1995. Catania went one further still, back in 1960-61. The Sicilian club were hammered 5-0 by Inter at the San Siro, with no fewer than four goals being scored by Catania players.

So, impressive though the two OMT OG’s were, not even they will stop this game from being firmly resigned to the back catalogue, never again to see the light of day.

In terms of getting there, the nearest train station is Barnes and it’s about a 15 minute walk from there north up Rocks Lane / A306. Alternatively, you can get off at Barnes station and jump on either the 33 or 72 Bus to the “Red Lion” (post-drinks) bus stop. The below link outlines the route, although you can just follow the signs for the “London Wetland Centre” which is right next door:

There are parking facilities on site, however I was warned a few weeks ago by the ground that parking is severely limited (20% of normal capacity) due to ongoing construction at the site. If you wanted to play it safe, I would suggest the above train-walk/bus combo.

Once you arrive, if you ask at reception there will be an away dressing room allocated for OMT’s. Post-match tea will be served in the Barnes RFC clubhouse afterwards.

They wear all red for their home kit.