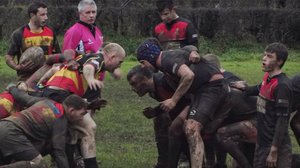 Ophir shows they are a team to be reckoned with and reaping the benefits of the work done on the training field!

he day started very early for many of the background officers of the club, with pitch inspections, and then messaging referees etc., to confirm the game was going ahead.

The pitch ‘looked’ lovely, thanks to the work put in during the week (by Ronan McCann & others), but on play, it obviously still suffered from a great deal of water, and very little ‘firm footing’. A slightly early kick off (requested by the visitors) was agreed by all, with a start made at 2.15.

Despite several players, including captain Phil Morrison, being unavailable, the 1st XV fielded a good strong side.

The visitors started well, scoring first, and again, leaving the catch up if 12 points, however, this never looked liked the dominant side which sat at the top of the table at any real point, with Ophir closing the gap to 5 points, with their own try scored by stand in captain, Neil Gray, preforming his usual physical game. Despite some excellent forward play, which occasionally found the ball spilled or not passed off when there were overlaps, Ophir were showing that they indeed could be much higher than the place occupied in the table, with 2 tried ‘disallowed being called as ‘held up’ or ‘not grounded’ (due to unfortunate mis sighting by the referee, who otherwise had a fantastic game managing the com,petitions well). A third try by Limavady saw the lead yet again extended to 12 points, Ophir again came back (this time the try was given) wide, with a score by Vice Captain, Adam Smith. Unfortunately it was difficult condition underfoot and this wasn’t converted (which would have left the lead to a paltry 5 points, however it was still only on try - 7 points)

In the very wet, slippery and difficult underfoot conditions, the league leaders had an astute and skilled kicker pinning the all back int the Ophir 22, when they were often under pressure in their own 22, with a very nippy winger (and occasionally off side- caught a couple of times by the referee), who had to be cautioned, for his over enthusiastic ‘feet first’ approach. 2 yellow cards were issued against the visitors, and in the second half nearer the end, it looked like there was going to be a 1st yellow against an Ophir player, however as numbers were hard to distinguish in the muddy camouflage, the referee was unable to identify the offending player, coming in illegally and dangerously at a maul (which was in the throws of stopping and was about to be made an Ophir scrum). Luckily this didn’t affect the game, and despite some further good attempts by Limavady, the Ophir boys dug in, and kept them out, managed to keep the score within 7 points, securing a bonus losing point.

Some unfortunate bad luck (‘positioning’ or a TMO would have helped) and some unlucky handling errors aside, Ophir showed that they are indeed a team to be reckoned with and are really showing the benefits of the work done on the training field!

Man of the Match; Adam McNaught - for his great ball service, control and play! Again, as with many of the games MoM was a close call between many players! Keep it going!