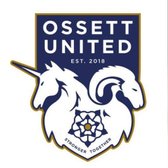 Over 140,000 involved in social media campaign

We knew people would get behind this and we expected a lot of attention but to see the final amount of people who engaged with this is staggering. We are so happy with the response.
Dan Jones, Marketing Manager for Ossett United

Here it is! The new badge of Ossett United Football Club.

We would like to thank everyone who voted, commented, critiqued and submitted their own designs for our new club crest. Over 140,000 people engaged in deciding which design would be the winner after the club put it out to the fans and general public. 5,360 votes were cast and the chosen design got 66% of the vote.

Ossett United who will play their home games at Ingfield from next season have already had many people ask for the club shirt and season ticket information.

Chief Exec Phil Smith commented “There have been a lot of enquiries for early season tickets and we are looking at options on how to make them available as soon as possible but we must do certain things in the correct order. Choosing a club badge of course now allows us to move the brand forward and create many new things like the new kit, website and other relevant marketing material. We are very excited and we now know the fans are too.”