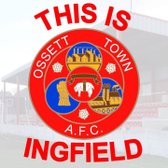 There has been a shake-up in Grant Black’s management team this week with Micky Norbury accepting an offer to become an assistant manager elsewhere.

Norbury returned to Ossett Town, where he spent time as a player in the 1980s, with Grant Black in February 2016 and quickly became a popular member of the group.

Grant Black was contacted by Norbury this week who told him he had been offered a job by one of his closest friends and felt it was the right decision to make the move and help at his new club. Black added “I am disappointed that Norbs has decided to move on, he has done great for us and helped me a lot. I didn’t feel I could stand in his way though and wish him well. I understand why he has made the decision”.

Grant Black acted quickly and approached Lee Ashforth who was delighted to accept the role.

Ashforth has extensive coaching experience having held roles at Harrogate Railway Athletic and most recently at Brighouse Town as number two to Paul Quinn, both left that role at the end of last season.

“I’ve had six months off from the game” says Ashforth “and that is the first time in 20 years I have not been involved. I have enjoyed the break and certainly didn’t miss pre-season! I had had a few offers over the summer and again in the last six weeks but there was nothing that totally convinced me to return, and as I say I was enjoying the break”.

“That was until I got the call from Grant this week, the opportunity to come in and work with him and Steve Ridley was too good to turn down. I was excited having spoken to them and discussing what has been built at Ingfield and that is why I knew it was the right time to get back into non-league football”.

Ashforth has worked under the likes of Eric Gilchrist, Billy Miller and Paul Quinn, as well as taking the reins himself at Harrogate Railway Athletic, despite being away from the game he has kept in touch with a number of managers, and particularly Grant Black.

“When Grant told me Mick Norbury was leaving and asked me to join the management team it was an instant yes. I have learnt a lot from the managers I have worked with and have to say in a short space of time Grant has built himself a fantastic reputation, I cannot wait to get working with him”.

“Ossett Town is a club where I have built several relationships over the years and I am looking forward to working within the club. The squad is really good and I know a few of the players already, I’ve tried so sign a few of them over the years”!
“I’m here to support Grant and ensure the team continues to progress as it has done during his term in charge. I have watched a few Town games this season, and many more in the Evo-Stik League, I’ve always been impressed by what I have seen”.

Ossett Town sit in seventh place, one point off a play-off place with a number of games in hand due to the Emirates FA Cup run, Ashforth isn’t one for publicly stating targets for the season but did say “I know Grant’s thoughts and where he wants and expects to be. I see my role to support and ensure I do all I can to hit those targets”.

“Personally I always want to improve individually over a season. I do that by learning something new in every match and training session. Between now and the end of the season I would like to improve my knowledge and working with a new manager and environment I envisage this happening”.

Ashforth will take his place on the Town bench for the first time this weekend as Ossett Town travel to 15th place Clitheroe who have 17 points from their 14 games this season.

Everyone at Ossett Town wish Lee a happy birthday today and welcome him to the club and also wish Micky Norbury the very best and look forward to seeing him back at Ingfield very soon.