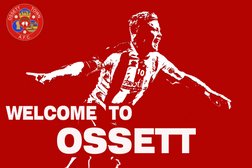 Frost to Warm the Hands of Town Fans

Grant Black has today continued his recruitment drive with the capture of Danny Frost from neighbours Ossett Albion.

This is not the first time Frost has turned out for the red half of Ossett, having played eight times in 2011 before injury curtailed his time at the club and he moved on.

The Barnsley based striker signed for Spennymoor Town in the summer before joining Ossett Albion just last month.

The striker is highly rated and been popular wherever he has played, former clubs include National League North side Bradford Park Avenue and Shaw Lane of the Evo-Stik First Division South.

Grant Black is delighted with the capture of Frost “I’ve known Frosty for some time, and once it became clear there was an opportunity of bringing him here I jumped at the chance. It took a bit of negotiating with Ossett Albion, as you would expect, now he is here I am delighted to have him on board".