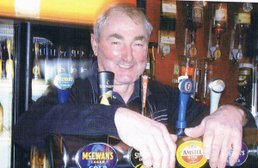 Graham Firth Steps Down As Chairman

After 28 years Graham Firth has handed over the role of Ossett Town Chairman.

Graham Firth, chairman of the club for some 28 years decided the time was right to step down from the role and not seek re-election for the post at the clubs 76th AGM.

Mr Firth first joined the club in the 1950’s as a tough tackling full back, playing alongside former professionals such as Len White and Jim Kerray. When Graham’s playing career was cut short by injury, he became the clubs first Commercial Manager. One of his early successes was to bring pitch side advertising to Ingfield for the first time.

He is also responsible for the perimeter wall around the pitch as well as overseeing the building of the stand at the Prospect Road end of the ground as well as countless other improvements to Ingfield as the years passed to ensure the club could continue to thrive and rise up the leagues to where it currently sits in the Evo-Stik Northern Premier League.

The members saw fit to recognise the work Mr Firth has done at the club and unanimously voted for him to become the Honorary President of Ossett Town AFC, a position he was humbled to accept. As well as this he was presented with an engraved decanter and a bottle of Whisky

Martin Voakes, a club member and former vice chairman praised Mr Firth for the improvements at Ossett Town’s Ingfield stadium saying “The ground is unrecognisable from when Graham took over” During his time there have been memorable games including the home friendly with Manchester United in the mid 80’s, and the FA Trophy game, hosting Doncaster Rovers in 1999. Graham should be very proud with the work he has overseen in his time at the club, the Clubhouse has grown and changed beyond recognition.

On behalf of the members Martin Voakes thanked Graham Firth for everything he has done for the club.

Graham Willis, the former Commercial Manager of the club has known Mr Firth for around 16 years and echoed Martin Voakes’ thoughts. Graham Willis has a great deal of respect for the time and effort Mr Firth has put into the running of the club, “he may not have always been right, and we have had our fallings out, but he has proven to be a good judge of character which has always been to the clubs advantage. I am proud to know Graham and to have worked with him as commercial manager”.

Graham’s replacement, James Rogers, said “I’m privileged to be taking over from Graham Firth, and delighted that he has accepted the position of honorary president at the club. It is positive that Graham continues to be involved in the club and I for one will use his extensive knowledge as I look to follow the work Graham has done and take the club forward”.

It is only fitting that the final word be left to Graham Firth “my predecessor, and club founder, John Carter, tasked me with continuing his work which is to try and provide the best level of senior football in Ossett and District, that is what has motivated me to carry on for 28 years”.