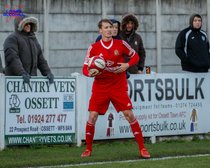 Town manager Grant Black has strengthened the squad further today, after the signings of Sinclair from Scarborough Athletic and Jack Mawson from Sheffield FC at the end of last week we can now confirm that midfielder Jake Ellam will be returning to Ingfield after a spell at Tadcaster Albion.

Ellam was a key member of the squad last season, making 24 appearances and hitting the net once, a spectacular strike at Burscough. Black is delighted to have him back at the club “Jake will add to the squad, he is a fully committed player and already knows what we are about, he will settle in straight away”.

Ellam admits it did not take too much convincing to return “It was a no brainer really, I had a good pre-season and started the season well too but the last month has been frustrating due to a lack of game time”.

“I had a conversation with the gaffer, he knows what I am about and I work well under him. It is a great club and I am glad to be back. I am raring to play”.

“Ossett Town have had another excellent start to the season, I see no reason why we cannot at least emulate what was achieved last year in the league, we have got a great squad here”.

Asked if he had a message for the Ossett Town supporters Ellam responded instantly “All Town Aren’t We”. Town fans are loving life at the minute, the signing of Ellam is another step in the right direction.