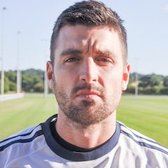 Nelthorpe and Boshell strengthen the ranks

New Ossett Town manager Lee Ashforth has bolstered the ranks with the signing of Craig Nelthorpe and Nicky Boshell.

Craig Robert Nelthorpe (born 10 June 1987) is an English semi-professional footballer who has been signed from National League North club North Ferriby United. His favoured positions are either at left back or on the left wing. Nelthorpe played for Brodsworth Miners Welfare and Frickley Athletic before joining Doncaster Rovers in 2004 and he made his first-team debut in 2005. He was loaned out on six occasions, playing for Hucknall Town, Kidderminster Harriers, Gateshead, Halifax Town and Darlington. He joined Oxford United in 2009 and after being released by them he joined York City. Having left York after a season he rejoined Gateshead.

Ashforth has also secured the signing of ex Guiseley and Bradford Park Avenue attacking midfielder Nicky Boshell (see image). Nicky has had an excellent career to date playing in the National League North and is a quality signing to add further to the existing squad.