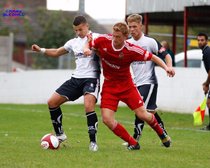 Bamber Bridge are a real force going forward, it will be a difficult game against a good side
Grant Black
When we kick-off against Evo-Stik North league leaders Bamber Bridge on Saturday it will have been 25 days and five matches since we last played for three points, Grant Black will be assessing his squad ahead of the game as injuries have taken their toll.

He will have Danny South and Jordan Deacey available again after being cup tied in recent games and admits he will be looking to bring players in to bolster the a squad he describes as slim on numbers at the minute.

Bamber Bridge sit top of the league with 30 points from 13 games and having hit the net 29 times are the top scorers in the league. Black knows it won’t be easy “Bamber Bridge are a real force going forward, it will be a difficult game against a good side”.

Twelve months ago it was a 2-0 victory in the corresponding fixture with Tyrone Gay and Jason Yates getting on the scoresheet, the two sides have met on 22 occasions since 2003 with Bamber Bridge just edging the encounters with nine wins to our eight.

At Ingfield we have won five of the 11 encounters, scoring 17 and conceding 13. There was a high scoring encounter in 2004 as the sides shared six goals, while the last four games have all been won by the side who have scored first, both teams enjoying two victories each.

Admission to the game is as follows: