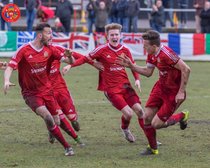 Town end pre-season on a high

Ossett Town ended pre-season with a fifth consecutive victory, and more importantly another 90 minutes of fitness ahead of the Evo-Stik North season which kicks-off on eight days time.

Evo-Stik South side, Town's opponents in the FA Cup in two weeks started quickly and struck the bar through Algar, both sides were fully committed in an entertaining first half and it was Town who broke the deadlock.

Good work down the right hand side saw the ball cut back to Hancock, who's movement was excellent and earned him acres of space ten yards out to strike home.

Chances were at a premium as the half came to a close, there was lots of neat play in the middle of the pitch as both sides played well.

Town doubled their lead minutes into the second half with a header from left back Liam Owen.

The second half was typically pre-season with a number of changes made by both sides. Former Ossett Albion keeper, Brett Souter, saved well from Kai Hancock and in Town's goal Leigh Overton was equal to everything thrown at him.

In the final moments Sheffield pulled one back through Joel Purkiss, he took the ball well with one foot before stroking home with the other for an excellent consolation.

Both sides will now focus on their opening league game before the two meet again at Sheffield for what will undoubtably be a very different game.