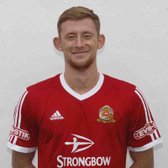 Good start & 3 points for the Reds

The Reds began this seasons campaign with a trip down the M62 to Prescot Cables, one of the few sides who took points off Ossett Town last season.

Danny Gibbons, Corey Gregory & Kai Hancock were named in the starting eleven, making their full league debuts for the Reds.

The game kicked off at 3pm and straight away Prescot were on the front foot and for the first 10 minutes put constant pressure on the Ossett defence.

Prescot tactics of the long ball into their left winger was paying dividends causing the Ossett defence all sorts of problems. A change in positional play from the Reds eventually cancelled out this threat.

The Reds started to come into the game and a couple of good runs from Kai Hancock troubled the Prescot defence.

On 14 minutes Martin Pembleton challenged for a cross and was clearly pushed off the ball in the area and the referee had no hesitation in pointing straight to the spot awarding Ossett a penalty.

Ashley Jackson took the penalty and smashed the ball straight down the middle to give the Reds a 1-0 lead against the balance of play.

Ossett settled down after taking the lead although Prescot looked the better of the two sides in the first 25 minutes of play.

New signing Kai Hancock started to cause the home defence problems with his pace and after a he received the ball on the edge of the box he spun hitting a first time shot which was heading for the top corner until he was denied by a top class save from the keeper who tipped the ball over the bar.

Ossett were forced into a change as Andy Hawksworth went down with an ankle injury. New signing Josh Snowden replaced Hawksworth at centre back.

On 32 minutes the Ossett pressure paid off and again it was Hancock who turned the centre back inside out on the edge of the box followed by a clinical finish low to the keepers right to increase the Reds lead to 2-0.

The Reds absorbed some pressure from the home side but Leigh Overton in goal and the defence were resilient in their play, especially Alex Peterson who made several magnificent blocks in dangerous situations.

Prescot again stepped up their play and Ossett were on the back foot for the last 10 minutes of the half and did well to see the half out and maintain a 2-0 lead as the half time whistle blew.

In the second half the game didn't flow as it had in the first 45 minutes and periods of the game became very scrappy with the Reds not looking as organised as you would expect from this team. The scrappy play saw a few poor tackles which saw the yellow card being branded on a number of occasions.

It's fair to say that both teams had an equal amount of possession and opportunities to score in the 2nd half. Osset Town
looked capable of seeing the game out, however the last 15 minutes were very nervy as the Reds lost their shape with some players not being disciplined in doing their job allowing Prescot find holes in the Ossett midfield and defence allowing the home side to really pile the pressure on the Reds defence.

The constant pressure paid off in the 90th minute when substitute Jordan Southwork broke through on the right and fired off a shot and as Overton moved across to cover the shot, he slipped and ball ended up in the back of the net to bring the score back to 2-1.

The referee indicated 5 minutes of added time and again the home side could smell a draw and continued to press Ossett. They had one great chance to equalise in the 93rd minute but again it was Alex Peterson putting his body on the line to block a fierce shot on goal.

The referee finally blew the whistle to end the game with Ossett Town relieved to run out 2-1 winners.

A tough start to the season with new players still learning about their team mates and the style & commitment that Grant Black & Mick Norbury demand. An important & deserved 3 points for the Reds who now need to do it all again on Tuesday night as they welcome well fancied Scarborough Town to Ingfield, kick off 7-45pm. Scarborough started their campaign with a 0-0 draw at home to Hyde United.