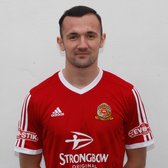 Ossett Town welcomed Droylsden to Ingfield for what was expected to be a tough fixture against a team who comprehensively beat the Reds last season.

The home side were without Andy Hawksworth who is still recovering from an injury.

It was Droylsden who drew first blood through Dominic Smith who had caused the Reds defence problems with his strength in the opening exchanges. Smith received a ball 30 yards out on the right wing and then cut inside unleashing a left foot shot into the top left hand corner of the net to give the visitors a 1-0 lead.

The first 15 minutes proved difficult for the Reds as Droylsden played a possession game and looked to keep the ball whilst playing out from the back.

Ossett adapted to the visitors style of play and started to dominate with Kai Hancock up front making some excellent runs & looking dangerous when going forward.

It was in the 21st minute when Kai Hancock through sheer persistence broke through into the box and chipped over the Droylsden defence to find Alex Peterson who clinically found the net to level the scoreline to 1-1.

Ossett had a good spell of pressing play after the equaliser and should have taken the lead when Martin Pembleton had a simple header from 8 yards out but didn't connect properly with the ball.

Both sides created goal scoring opportunities for the remainder of the 1st half with the best chances falling to the home team.

The 2nd half started with no changes in personnel to either side.

Ossett went into a 4-3-3 formation earlier in the 1st half and this was paying dividends as they were creating plenty of chances and really looked as though they were the team that could go on and win the game.

In the 80th minute and against the run of play Droylsden won a throw in 10 yards from the corner flag. The Reds defence had switched off and Scott Metcalfe found himself unmarked which allowed him to turn and drive a low ball into the near post which was met first by Ciaran Kilheeny who netted past Leigh Overton from 5 yards out to give Droylsden a 2-1 lead with 10 minutes remaining on the clock.

Ossett changed into a 3-3-4 formation in the hope of finding an equaliser and again created chances but all hopes of getting something from the game ended in the 89th minute when Danny Gibbons found himself one on one with Scott Metcalfe who showed strength in holding Gibbons off and then lobbing the oncoming Overton to increase the visitors lead to 3-1.

The final whistle blew with a scoreline that flattered the visitors in a match which Ossett Town had created enough chances to win 3 games and whilst the result is disappointing on another day the Reds could have bagged a handful.

The Reds now have to pick themselves up for a massive game on Bank Holiday Monday when they travel the short distance across town for the local derby against Ossett Albion, a game where form and results go out of the window. Nothing less than 3 points will be demanded by Grant Black from his players to ensure the Reds keep in touching distance of the teams heading the table at the moment.