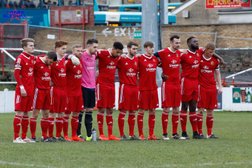 A hard earned 3 points for the Reds

The Reds welcomed Mossley F.C to Ingfield looking to build on a satisfying 1-1 draw against Hyde.

This was never going to be an easy fixture with both teams next to each other in the league.

The first half was a fairly bland affair with both sides cancelling each other out without really creating any solid chances.

Steve Ridley was booked and was lucky to stay on the pitch after a possible 2nd yellow wasn't given by the referee.

In the 40th minute Ridley was replaced in midfield by new signing Jordan Deacey.

The second half started with much more impetus with Ossett looking dangerous from the start.

The first real chance of the game fell to Alex Low in the 60th minute who saw his excellent goalbound header brilliantly saved by the visiting keeper.

The Reds dominated the second half with Kai Hancock testing the keeper 3 times and each time pulling off top class saves to deny him a goal.

In the 92 minute Josh Snowdon attempted to head a ball in the opposition penalty area and was kicked in the head, the referee had no hesitation in pointing straight to the spot for a penalty kick.

Ossett have missed several penalties this season but it was new signing Danny South who stood up to take the kick.

Danny South steps up to take the penalty and smashes the ball down the middle giving the keeper no chance.

The final whistle blew with the Reds leading 1 - 0 and earning another 3 valuable points.

The Reds deserved the 3 points after a commanding 2nd half performance.

Ossett Town now travel away on Saturday 30th September for the FA Cup fixture at 1874 Northwich who actually beat Mossley 2-0 in the previous round.