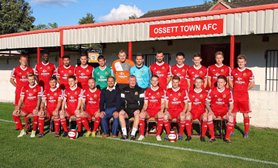 The Reds travelled the short distance to the i2i stadium at Tadcaster for a Yorkshire derby league game sat 1 point above the Brewers in the league but with the benefit of games in hand.

After the disappointment of the FA Trophy loss to Droylsden manager Grant Black would have to lift his squad and get them motivated to push on in the league. The squad is depleted at the moment due to injuries and suspensions with Andy Hawksworth ruled out for the season and requiring surgery. Martin Pembleton & Sam Wright are not fully fit with Corey Gregory missing the upcoming Clitheroe game through suspension. Isaac Assenso will also miss the next 3 games after a straight Red dismissal.

Grant Black changed the formation from the usual 3-5-2 to 4-3-3 for this fixture with Kai Hancock recalled into the team up front with Emile Sinclair & Danny South.

The first 20 minutes of this game was an even affair with the home side creating a couple of scoring opportunities but unable make them count. Tadcaster were caught on the break in the 25th minute when Kai Hancock latched on to a superb through ball, as he tried to dribble wide of the Keeper, he was brought down in the penalty area and the Referee immediately arcaded a penalty to Ossett. The keeper protested his innocence to the officials and several Tadcaster players imposed themselves on the linesman, however after discussions between the two officials, the decision stood. Danny South placed the ball for the spot kick and duly scored sending the keeper the wrong way and putting the Reds into a 1-0 lead.

3 minutes later possibly influenced by the heated attitude of the home players over the penalty award evened things up as Isaac Assenso was adjudged to have brought down Tom Corner and the Referee gave a penalty to Tadcaster. Everyone in the ground was then amazed as Assenso was then shown a red card and dismissed in the 30th minute.

After going down to 10 men Black shuffled the formation moving Danny South into the centre of defence. The home side then spent the remaining 15 minutes of the 1st half pressurising the Ossett defence with attack after attack. Solid goalkeeping from Leigh Overton and strong discipline and concentration from the back four of Alex Peterson, Danny South, Ashley Jackson & Anthony Mackie showed why the Reds have secured so many clean sheets in the past.

The Ossett players went into the dressing room at half time deservedly maintaining their 1-0 lead.

The second half was pretty much one way traffic with Tadcaster searching for an equaliser. The midfeld trio of Steve Ridley, Jake Ellam & Jordan Deacey had to work extremely hard as they were outnumbered for 60 minutes after the sending off. Emile Sinclair and Kai Hancock led the line defending from the front when necessary.

Not for the first time this season the Reds gave a brilliant demonstration of how to win a game with 10 men, every player gave everything in this match and once again the management team of Grant Black and Micky Norbury showed their ability to win games in an unorthodox manner having the capability to diversify playing tactics to meet difficult circumstances.

The Reds held out to the final whistle to record a superb 1-0 win against all the odds.

It was disappointing to see some media sources stating negativity about the Ossett Town performance so let's just put the win into perspective.

They played for 60 minutes with 10 men against a top attacking team.

They didn't concede in that 60 minutes.

They had to change the formation 4 times during the game.

The players work rate was formidable.

Media reporters and writers should understand that football skills take on many different forms, it's easy to talk about attacking, possession and individual skills when a team wins a match, however what about the different skills needed to win a game when your backs are up against the wall for 60 minutes. I would argue that not many teams have the winning mentality needed in these situations.

A win is a win and the satisfaction gained from this performance for everyone involved at Ossett Town will be extremely high !!

This win now moves the Reds into 7th in the league, one place below the play off positions and with games in hand Grant Black will be fighting for a play off spot in the upcoming game away at Clitheroe next Saturday.