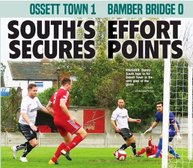 Ossett Town welcomed high flyers Bamber Bridge to Ingfield. The visitors sitting as league leaders prior to this game.

The management team of Grant Black, Mick Norbury & Steve Ridley had a difficult job today in ensuring the disappointment and excitement of the recent FA Cup run culminating in a 2–1 replay loss to National League side Solihull last Tuesday night didn't affect the physical and mental tenacity of the team going into this game.

Grant Black strengthened his injury hit squad bringing in the experienced striker Emile Sinclair from Scarborough who was named in the starting line up for today's game. Black also signed Jack Mawson another young, hard working and strong forward. Also returning to the club is Jake Ellam who was with the Reds last season before signing for Tadcaster at the start of this season.

This was going to be a real test of where the Ossett Town squad stands at the moment in terms of competing for promotion this season as they come up against a tough, experienced side with no less than 8 ex-Pro's or current Pro's on youth loan from clubs such as Everton, Wigan, Preston, Fleetwood and Blackpool.

The visitors were undefeated in 12 games in all competitions and have secured 23 points from a possible 27 in their last 9 league games, impressive stuff by any standard.

The Reds were without Seon Ripley, Sam Wright & Andy Hawksworth who were all injured. Influential midfielder Corey Gregory was also missing as he starts a 3 match ban. Black set up in the 3-5-2 formation that has worked well in the past few league games with Emile Sinclair replacing Kai Hancock up front.

Straight from the kick off the visitors won a corner and from the corner Brad Carsley broke free and headed 3 yards wide.

For the 1st 15 minutes, Ossett looked comfortable in possession when Black was forced to make a change as Martin Pembleton started to struggle with a re-occurrence of a recent foot injury. Josh Snowden came on in the wide right position with Anthony Mackie moving into Centre Midfield.

Bamber Bridge were seeing lots of possession and created several half chances but nothing that bothered Overton in goal.

Ossett won a throw in deep into the visitors half, Ashley Jackson fired in a long throw which was headed on by Alex Peterson to Emile Sinclair at the far post, Sinclair turned and fired in a cross which was met by Danny South arriving at the back post to give the Reds a 1-0 lead.

For the remaining 20 minutes of the first half the visitors had lots of possession and played some good football, creating several chances which were all defended well by the well organised and determined Reds defence and keeper.

The visitors No 11 Daniel Mooney was causing the home defence problems with his direct running and silky skills on the ball.

Ash Jackson was booked for a foul on Brad Carsley who was a constant threat with his bullish attacking and hold up play.

The second half saw Bamber Bridge really push on for the equaliser and it was clear that the tough FA Cup ties, not surprisingly had played a part in some Town players looking increasingly fatigued as the game wore on. The hard working Steve Ridley was replaced in midfield by Liam Scott who did a fine job in slowing the game down with good decision making to give the Reds players a breather from the incessant forward play of the visitors.

For 30 minutes of the second half it was all Bamber Bridge on the attack, but whilst the visitors manager Neil Reynolds probably couldn't believe how his team didn't find at least an equaliser given the chances created, once again The Town players, even with tired legs dug deep and defended with their lives putting bodies on the line and making last ditch blocks and tackles to maintain their lead.

Emile Sinclair was replaced up front by Jack Mawson. Sinclair made a major contribution to the game with his tireless work rate and the assist for the Danny South goal and should be a great asset once he regains full match fitness.

Ossett rode out the storm and then in the last fifteen minutes started to press the visitors defence higher up the pitch which could have resulted in at least 2 more goals.

Mackie chipped a lovely ball into Owen who drove to the by-line only to see his cross defended out for a throw in. From the throw in Jackson sends in a long throw into the box which is passed back to him and he cuts in and crosses into the box and finds Anthony Mackie who's header is then headed back across the box by South back to Mackie who beats the defender and sends in a left foot shot, only to see the keeper makes a great save low down tipping the ball round his post for a corner.

From the corner South sees his header tipped round the post for another corner.

The referee blows for full time with Ossett Town running out 1-0 winners.

This was not the best performance of the season by the Reds, however once again they have shown that they can truly defend and win games ugly when necessary. Today's opponents, in my opinion are the best side we have faced this season with quality all over the pitch matched by fitness and skill in abundance.

This game was a marker for Grant Black and his expectations should be high after this performance, the lads will now have a well earned & much needed seven day break before the next game at home on Saturday 28th October.

It's another 3 points on the board, another clean sheet and the Reds still have 4 games in hand on teams up there in the league play off positions.

I have to give a special mention to the Bamber Bridge manager Neil Reynolds and his team who to their credit, whilst extremely disappointed with the result were incredibly magnanimous in defeat, taking nothing away from Ossett Towns performance in his post match interview.