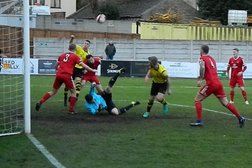 After the excitement of a brilliant FA Cup run, it was back down to earth for the Reds as they welcomed Colne FC to Ingfield with Manager Grant Black now fully focused on the league campaign.

Colne had hit some good form coming into this fixture having beaten Kendal Town 2-1 followed by a respectable 2-2 draw against high flyers Hyde United having fought back from 2-0 down.

The visitors confidence will have been bolstered by the return of prolific striker Olly Wood who re-joined Colne earlier this week from Evo-Stik premiership side Lancaster FC. Wood scored 23 goals last season and starts the game up front for Colne.

The Reds will be looking to maintain the recent form which has seen them achieve 23 points from a possible 30 in the last 10 games.

Grant Black & Lee Ashforth set up for this game in a 4-3-3 formation with Josh Snowden replacing the suspended Alex Low at Centre Back.

Martin Pembleton and Sam Wright returned from injury and were a welcome addition to the bench.

Straight from the kick off Ossett were on the front foot and causing the visitors problems from the start. The first ten minutes was all Ossett Town, however a lack of concentration saw the Reds go 1-0 down when Olly Wood headed the ball on for Alex Curran to take into the Ossett penalty area. his shot was deflected off a defender and landed at the feet of Ollie Crawshaw who fired the ball home from a tight angle against the run of play.

Ossett were stunned by the goal but quickly got back into their stride sticking to the game plan. The Colne defence were unable to handle the strength and aerial prowess of Danny South who won everything in the air.

Jake Ellam had a goal bound shot blocked from just inside the area. The Reds won several corners but were unable to capitalise on their superior height advantage.

The visitors were struggling to handle the front three with Emile Sinclair making some strong direct runs at the visitors defence.

Colne created a couple of chances with Matty Morgan firing over the bar from a Snowden half clearance and Curran also shot well wide from 25 yards. The Reds defence looked comfortable with captain Alex Peterson marshalling the back four superbly.

At the other end it was Danny South who came closest for the Reds after a succession of long throws and corners his header was pushed round the post by Hakan Burton.

The unrelenting pressure from Ossett paid off when the referee awarded a penalty when a Colne defender clearly handled the ball in the area.

Danny South stepped up and drilled the ball into the bottom corner to level the scoreline to 1-1 after 35 minutes.

On 55 minutes Town were unlucky not to take the lead as Josh Snowdens far post looping header came off the top of the crossbar.

The Reds looked a stronger proposition in the second half with Ashley Jackson & Anthony Mackie playing more of a wing back role, getting forward much more than in the 1st half.

The visitors had a short spell of possession with Curran & Miller coming close to scoring but denied by Overton.

Ossett were the better side and their pressure came to fruition when Anthony Mackie chipped a brilliant ball onto the run of Kai Hancock who weaved his way through the penalty area and passed to Substitute Liam Owen who smashed the ball past Burton to give the home side a 2-1 lead.

Things got decidedly worse for Colne when on 73 minutes a frustrated Lee Pugh put in a reckless two footed challenge on Jake Ellam. The referee had no hesitation and immediately produced a red card to Pugh reducing the visitors down to ten men. Ellam was extremely lucky not to have been seriously injured in the tackle.

As Colne chased the game looking for an equaliser, Anthony Mackie intercepted a long pass and volleyed the ball towards Hancock who found himself one on one with the last defender who looked favourite to clear the ball, however Hancock showed real tenacity & strength in winning the ball and then beating the keeper from 15 yards to make the game safe for Ossett at 3-1.

Shiraz Khan and Olly Wood both had shots in the closing stages of the 5 minutes of added time but nothing that troubled Leigh Overton.

All in all, a competent performance from the Reds who were in control of the game from start to finish taking their unbeated league run to 6 games.

Ossetts next fixture is at home on Tuesday 14th November in a Doodson cup fixture against Micky Norburys new club Goole AFC.

The next league fixture is on Saturday 18th November away to Skelmersdale where a victory could see Ossett back where they belong in the play off positions with between 1 and 4 games in hand on teams above them.