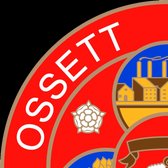 Bosh Nicks it for Town

Ossett Town got back to winning ways on the road at play-off challengers Colne thanks to goals from Ashley Jackson and Nicky Boshell.

The Reds came into the game on the back of three games without a win or a goal, but thanks to full back Ashley Jackson the Town fans did not have long to wait.

With just two minutes on the clock the busy Martin Pembleton swung over a free-kick from the right, it was headed back across goal where, from six yards, Jackson looped a header goal bound. Hakan Burton in the Colne goal looked well set but to the surprise of the 242 in attendance he stood and watched as the ball dropped below the bar and into the net.

Colne were not expected that, and attacking up the slope took the game to Town, Hodgkinson fired a header over when he should have done much better.

The lead lasted ten minutes, A Colne attack was halted by Isaac Asssenso who collected a yellow card for his troubles, the free-kick was sent to the far post where Peterson won the ball when he appeared to be pulled back by Andrew Hollins who from the corner of the six yard box beat Leigh Overton.

The Town players were furious with the decision but unmoved the officials indicated back to the centre circle, the scores were level.

Both sides looked to attack the other but chances were few and far between, a low cross for Colne was turned past the post before Town went even closer. Town threatened down the right, Pembleton turned the ball back to the waiting Jason Yates, his low curling effort from the edge of the area left a flat footed Burton looking on as the ball struck the base of the post and out for a goal kick.

Keith Mackie and Steve Nicholson had taken charge of this game as manager Lee Ashforth was unavailable due to a pre-arranged engagement made before his appointment, what ever they said during the break as Town came out and took the game to Colne and dominated the majority of the final 45 minutes.

Bailey was replaced by Ellam who slotted into right back, the defence looked strong throughout the 90 minutes.

Martin Pembleton went close midway through the first half with a curled effort from the corner of the area that was held by the keeper, Town forced a number of corners and attacking throw-ins also but despite good delivery from Nelthorpe and Jackson the ball would not drop favourably for Town.

That was until the 81st minute when a ball from the left found its way to Boshell 18 yards out, he took the ball down on his chest and struck a left footed volley into the top corner, giving Town a much deserved 2-1 lead.

Overton was not threatened in the final stages despite some pressure from the home side with Town managing the game well, Pembleton, Yates, Peterson and Nelthorpe all frustrating the home side during five minutes of added time.

Ossett Town are next in action at home to Brighouse Town on Easter Monday, kick-off 3pm.