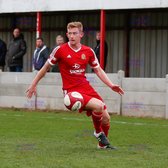 Town Kept at Bay by Colwyn

Lee Ashforth took his Ossett Town side to North Wales; despite the result, he can be proud of the performance and never say die attitude from the side who took the field.

Pre match preparation was disrupted as heavy traffic caused a number of players to arrive at the ground with little time to spare, and in the early stages it looked like that could affect the result as Town struggled to get a foot hold in the game.

Colwyn Bay like to knock the ball around, and thanks to the groundsman they had a pitch that they could do that on, hours earlier the game was in doubt with standing water on the surface. The work the groundsman and his team put in throughout the day must be applauded to get the game on.

After just four minutes, Town got a let off as the linesman’s flag prevented the opening goal before minutes later Leigh Overton came to his defences rescue with a point-blank save within the six yard box that any goalkeeper going to Russia this summer would be proud of.

The home side, clearly trying to mould themselves on Pep Guariola’s Manchester City with a style of play easy on the eye were almost the makers of their own downfall as on the greasy surface there were some misplaced passes amongst the defenders that Town looked to take advantage of.

Ossett Town looked to get on the front foot with Mackie creating a chance for Jake Ellam, his strike from the corner of the box was turned away for a corner before it was Mackie’s turn to have an effort on goal after excellent hold up play from Jason Yates.

Midway through the first half Colwyn Bay scored the only goal of the game. Intricate play on the edge of the box released Jack Hindle who from a tight angle was foiled by Overton at the expense of a corner. From the resulting set piece Astley Mullholland found himself unmarked and headed home, much to the delight of the play-off chasing side.

That goal could have seen the flood gates open after recent results that have not gone Town’s way, but this side were not going to let that happen. Colwyn Bay continued to be dangerous in attack but with Assenso and Jackson strong at the heart of the defence they refused to let the Seagulls through.

As half time approached Town spurned their best chance of the game, good play saw Alex Peterson released Anthony Mackie, but excellent keeping by Matt Cooper saw him close the gap quickly and saved well as the tricky Town winger tried to slot the ball home.

The home side had edged the half, and lead by one goal, but Ashforth and Nicholson on the Town bench will have been confident of taking something from the game.

The second period was a half of few chances in reality. Colwyn Bay sat back and soaked up the Town pressure and despite not working Leigh Overton until late in the game were always a danger to Ossett when they attacked.

Nelthorpe’s corner was met by Peterson whose header was deflected over, the resulting set piece was cut back to Mackie who struck over.

Town prodded and probed without having any clear opportunities, yet it was Overton who was called into action in the final stages. Colwyn Bay won a contentious free-kick that was curled expertly towards the top corner.

Overton, who makes a habit of excellent saves, did so again stretching every inch he has to turn the ball over as it headed to the top corner.
As the clock ticked down there was one final half chances as Yates fired across goal from the right hand side, begging for a touch from anyone to turn it home.

The result leaves Town in 14th place on 44 points with twelve to play for starting on Saturday at home to Atheron Collieries.

There is one final away game this season at Radcliffe before the curtain falls with back to back home games against Tadcaster Albion and Goole.