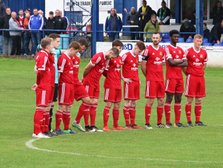 The Reds are in the 2nd qualifying round after defeating Goole AFC.

The Reds welcomed Goole AFC to Ingfield for the 1st qualifying round of the FA Trophy Cup. Ossett Town would be looking for a repeat performance from their recent 3-0 victory away to today's visitors.

The Vikings have strengthened their squad since that meeting, so today's re-match should prove to be a bigger test for the Reds.

Grant Black starts with pretty much the same team that knocked Northwich out of the FA Cup last Tuesday evening with the only change being the tactical selection of Danny South partnering Kai Hancock up front and captain Alex Peterson moving to Centre Back with Josh Snowden named as a substitute.

With the prestigious FA Cup tie next Saturday against National league side Solihull Moors, the players will be keen to state a claim for a place in that starting eleven.

The game commences and Kai Hancock soon troubles the Goole defence down the left wing and wins a corner. From the corner the keeper collects the ball.

Soon after Anthony Mackie slips and let's in Cruuz who fires over the bar.

Hancock receives a flick on from Danny South, he spins but shoots over the bar.

Corey Gregory Free kick is met by Mackie who finds Ashley Jackson who watches his shot fly over the bar.

Danny South feeds Anthony Mackie down the right, Mackie crosses and Alex Peterson's flicked header goes over the bar. This was the best chance of the game so far.

A great chance for the Reds to take the lead as Alex Low heads the ball into the path of Hancock who's attempted lob is just wide.

Chance for Corey Gregory but his shot is blocked and Hancock is squeezed out as he attempts to get on the ball.

The teams come out for the second half with Ossett making a change with Seon Ripley replacing Kai Hancock up front.

Ripley is straight into action and is fouled out on the right. Steven Ridley fires in the free kick and Ashley Jackson pokes the ball home to give the Reds a 1-0 lead.

Ossett soon made it 2-0 with a overhead kick from Alex Low.

The Reds dominating play as a rare Goole attack ends with an over hit cross.

Seon Ripley sends Danny South clear with a superb through ball and South scores to increase the Reds lead to 3-0.

An excellent 2nd half performance from the Reds who progress into the 2nd round and will play either Ossett Albion or Droylsden who ended up drawing 1-1 and will now face a replay to decide who will face the Reds.

Ossett have another cup game on Tuesday 10th October as they face Campion at Ingfield in the West Riding County Cup. Kick off 7-45pm.

On Saturday 14th October, the Reds travel to the midlands for a massive game as they take on National League side Solihull Moors in the 4th qualifying round of the FA Cup. If the Reds can overcome Solihull they will go into the draw for the 1st round proper which would be a tremendous achievement for Ossett Town and this young squad.