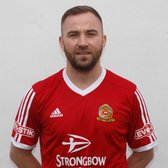 Steve Ridley goal puts Ossett into the draw for the next round.

It's the magic of the FA Cup again today as Ossett Town welcomed Atherton Colliery to Ingfield for this Emirates FA Cup 2nd qualifying round. The visitors were newly promoted into the Evostik 1st Division North this season and have acquitted themselves well so far.

The two sides met a week ago at Atherton when Ossett Town ran out comfortable 2-0 winners, however the Reds are aware that result means nothing come the 3pm kick off today and they will need to be on top form to progress in this world famous competition.

The Reds go into this game on the back of 5 wins on the trot and in the last 3 games, 3 clean sheets show how strong the new defensive partnership is becoming game by game.

Ossett Town have not progressed beyond this round for 4 years and a victory today could see a mouth watering tie in the next round.

Grant Black named an unchanged side for the third consecutive game with a extremely strong subs bench and sticks with the 3-5-2 formation which has proved to suit this set of players in the last few games.

Atherton added 3 new players to the squad from last weeks encounter creating an element of uncertainty as to their team selection compared to last week.

3pm and the game commences, Ossett Town having the better of the opening exchanges but as the visitors break they win a free kick 30 yards out. Left back, Gareth Peet takes the kick and forces Leigh Overton into a good save low to his right.

On 17 minutes it was the turn of Kai Hancock who saw his volley well saved by Adam Reid in the Atherton goal.

Jamie Forbes the Atherton centre back received a yellow card.

Ossett then had a long period of controlling the play and creating several chances.

It was the Reds who drew 1st blood and opened the scoring on 39 minutes when Steve Ridley curled in a left footed corner which missed all the players at the near post which confused Reid in goal and he watched helplessly as the ball went directly into the net to give Ossett Town a 1 - 0 lead.

In the last 7 minutes of the 1st half, the visitors had a good spell of possession forcing several corners & causing some nervy moments but Overton and the defence held strong to the half time whistle.

The Reds have looked far the better team and the more likely to score in the first half although Atherton have shown that they are more than capable of creating chances especially from set pieces.

As the 2nd half gets underway neither team make any team changes.

The visitors start strongly looking as though they had changed Into a more attacking minded 4-3-3 formation.

In the 50the minute Kai Hancock received a yellow card for a foul.

Reds centre back, Issac Assenso is replaced by Danny Gibbons.

This was definitely turning into a game of two halves as Atherton pressed for an equaliser with Ossett creating a couple of half chances for Kai Hancock who saw both his attempts blocked by defenders.

The last 20 minutes saw wave after wave of attacks from the visitors with the whole Reds team defending for their lives, working non stop, putting bodies on the line and Overton once again showing great goalkeeping skills and safe hands to deny the visitors a goal.

Steve Ridley playing with a back injury was replaced by Sam Wright and Anthony Mackie replaced by Seon Ripley in the 80th minute.

The referee indicated added time of 5 minutes, however then played 8 minutes ??

The Reds saw out the added time with Hancock, Ripley & Peterson running the ball into the corners at every opportunity.

The final whistle blew to the relief of the Management, players and supporters alike.

This was a proper cup tie and had everything in it. The visitors will travel home feeling they should have taken something away from this game but let's take nothing away from the Reds who won the game in the first half and then showed incredible character & desire backed by tremendous defending and unbelievable work rate all over the pitch to put themselves in the hat for the draw of the next round. This was not the first time this set of players have put in a performance like this as they did exactly the same against Consett in the previous round.

The real headline of the day came after the game when it was learnt that Collieries fan Eric Lancaster had cycled to the game from Atherton. That’s correct, the 85 year old had decided to make the journey on his bicycle, a total of 51 miles, and five hours in the saddle, just to watch his beloved Colls in the FA Cup. It’s safe to say the black and whites hero that day deserved the coach journey home.

Grant Black and his squad should enjoy this win but then It's back to the league campaign on Tuesday 19th September as the Reds welcome newly promoted league leaders South Shields to Ingfield for a 7-45pm kick off in which will undoubtedly be the biggest test of the season so far for this young squad.