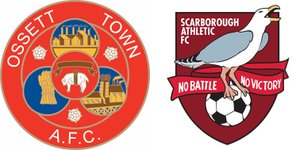 Beadles About To End Cup Interest

Ossett Town's Cup Exploits Are Over For Another Year

Ossett Town took part in our twelfth and final cup game of the season at Scarborough Athletic on Tuesday night on what turned out to be a very eventful night, particularly off the field!

Manager Grant Black did not manage to make the game due to a minor car accident on route, not surprising given the snow and sleet that had to be endured on the trip over. Goalkeeper Leigh Overton and captain Alex Peterson both failed fitness tests and with Kai Hancock suspended, Ashley Jackson and Jake Ellam amongst the substitutes and Corey Gregory also not involved there were six players who can call themselves regular starters not on the pitch at kick-off.

There was further upheaval as Anthony Mackie pulled up in the warm up, replaced by Josh Snowden who had been named amongst the substitutes.

Ed Hall, signed on the day from Bradford Park Avenue started in goal with Steve Ridley playing left back.

Scarborough Athletic, who have seen their last two games postponed, started with a strong side, amongst them former Ossett Town players Tommy Taylor, Dave Merris and James Walshaw.

As you would expect it was the home side who started strongly and had an early chance as right wing cross found Walshaw who incredibly missed the ball when only ten yards out.

Ossett Town defended in numbers and looked to attack on the break. Danny South was causing the home side problems and won an early free kick on the left wing. Captain for the day, Martin Pembleton, swung the ball over which was defended well by the Seadogs.

With the rain, and hail, coming down hard both sides were struggling to keep their footing and turning on the spot was proving difficult. Walshaw struck a free-kick into the wall and for all the home side pressure Ed Hall was only called into action once in the opening exchanges, saying comfortably low down to his right.

It was a former Ingfielder who was involved in the opening goal for Scarborough, Dave Merris stood over a right win free-kick which he whipped over towards the far post where it was met by the left boot of Sam Hewitt who turned the ball home with 38 minutes on the clock.

Ossett Town pressed forward and capitalised on a defensive mistake. Emile Sinclair, on his first return to the Flamingo Land Stadium, closed in on Tommy Taylor’s goal, with the crowd expecting him to shoot he checked back, beating a defender and opening up the angle, from 18 yards he lifted the ball over the stranded Taylor for a quality equaliser.

Town almost instantly took the lead as Alex Low found himself free in the penalty area. Ridley’s corner picked him out but the effort was off target. The scores were level at half time, Scarborough undoubtedly had had the better of the half, but on chances and the scoreboard it was all square.

The second half started scrappily, James Walshaw was replaced by Luke Dean for the home side before Ash Jackson took his place on the pitch for Ridley, giving the Assistant manager the opportunity to direct affairs from the touchline along with Lee Ashforth.

Jackson was straight into the action, a mix up with Hall almost let Dean in but the side cleared the danger. The home side were on top, with more changes for both sides. It was one of those changes that was decisive, Jimmy Beadle finding space in the 18 yard box, his strike giving Hall no chance.

Ossett Town were not deterred and continued to probe, a delicate chip from South released Sinclair, he reached the ball first and tried to lift the ball over Taylor, that succeeded but it cleared the cross bar too.

There was one final opportunity for Town and that fell to Liam Owen, the ball fell to him from a corner and if anything he caught the ball too well, from an angle his effort flew wide with Taylor beaten.

Scarborough Athletic progress to the third round of the Integro Doodson League Cup, Grant Black, however, will be pleased that the strength of the squad shows he has options when it comes to team selection in the coming months.