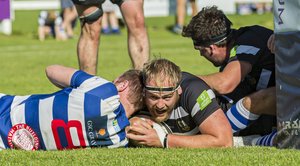 Otley scored 34 points in this pulsating game of rugby but in the end were denied their first win at Corbridge.

They got off to the perfect start, Ben Smith kicking a penalty within the first minute from the opposition 10 metre line. Otley found themselves encamped in their own half for the next 25 minutes, good defending keeping the north-easterners out. The visitors extended their lead on 27 minutes when Brett Mitchell forced his way over, Smith adding the conversion.

Scores by Tynedale’s Graeme Dunn shortly afterwards, and then Rob Parker when there was 47 minutes on the clock which was converted, gave the home side a narrow half time lead.

Tynedale extended their lead five minutes into the second half after Otley lost a line-out on the left hand side, the ball being worked across the pitch for Liam Checksfield to score. A high tackle by Tynedale allowed Otley to put the ball deep into their territory, and although the Otley forwards tried to push their way over, they were held up. From the 5-metre scrum, the ball was thrown wide leaving Henry Roberts to go over unchallenged on 54 minutes, Smith adding the conversion.

After Otley failed to secure the restart, they were punished when Callum Pascoe scored a converted try. A minute later Otley had levelled the score, Ben Magee running in from outside their 22 giving Smith an easy conversion. Then just after the hour mark, a Josh Hall run set up Henry Roberts to get his second.

The pendulum swung back to Tynedale when Rob Parker got his second, but three minutes later after Ben Magee kicked for territory. A cruel bounce flat-footed the Tynedale defence onto which Brett Mitchell pounced, Elliott Morgan running behind took over to score his debut try for Otley.

Regrettably the lead was short-lived, the Tynedale scrum pushing over prop Ben Haigh into the corner. Fortunately, the conversion drifted wide. For the remaining five minutes both sides continued to find the edge but three points for each side was a good, if not wanted, result.

Picture courtesy of John or Barbara Austin of Tynedale. There are more photographs on their webiste