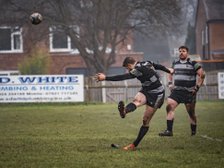 Otley claim the derby match by one point

We were told before the match that the Sandal side that played at Cross Green in September had changed a lot, and so it proved. Otley kicked off playing down the slope on what was a soft pitch, despite the frost the previous night, and found that their fellow Yorkshiremen were certainly up for the game.
The home side took the lead after 4 minutes when Otley held on to the ball for too long on their 10 metre line, Jake Adams stepping up to take the penalty. Sandal had the majority of the possession in the first quarter and, having gained the territorial advantage, kicked the ball into the Otley 22 after the visitors had conceded another penalty. However, they could not take advantage of the situation as they were also penalised for holding on. Brett Mitchell led the charge out of the half and Otley gained a penalty when Sandal were caught offside. However Otley’s enthusiasm got the better of them and were penalised for diving in.
Sandal stretched their lead on 25 minutes after Otley were again penalised, this time for crossing in their half. Sandal put the ball into the right hand corner and having secured possession at the line-out, moved the ball across the pitch with Jack Handley diving over in the opposite corner. Sandal were unable to gather the restart cleanly and from the scrum Otley gained a penalty, Joe Rowntree putting the ball through the uprights. Alex Beaumont and Callum Irvine then worked the ball down the left hand flank, after which the ball was brought into the centre at which point Sandal were caught offside. Rowntree’s kick was true. With three minutes remaining in the first half, he had another attempt from the half way line and whilst it had the distance it was slightly wide of the posts.
The second half saw the two sides continue to battle it out, and as the game went on Otley began to get dominance in the scrum. Towards the end of the third quarter Otley slowly crept forward into Sandal’s half with what must have been a 20-phase move but it came to nothing. Sandal had the opportunity to stretch their lead on 63 minutes, but the kick from Otley’s 10 metre line missed. As Otley’s stamina came to the fore, a rolling maul from them out of their half deep into Sandal’s, set up another platform. Sandal were unable cope and conceded a penalty allowing Joe Rowntree to step up again, giving Otley the narrowest of leads with 10 minutes to go. Otley saw the remainder of the mud-fest out without incidence, knowing they had been in a game.
Share via
FacebookTwitter
https://www.pitchero.com/clubs
Recent news