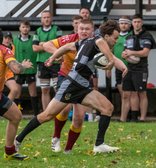 Otley started the second half of their season with a close 11-9 win against Macclesfield, a side they had scored nine tries against earlier in the season. The Blues had come to Cross Green only having lost one of their last five games, and they were certainly not going to go down without a fight.

The visitors kicked off and the first five minutes was played within the two 10 metre lines, both sides trying to work each other out. Otley were the first to break out, two penalties taking them into the opposition 22 but they were then penalised for holding on. The home side were soon back into the 22, but were unable to get the ball over the line. On 16 minutes, Henry Roberts ran onto a cross-field kick on the half way line by Callum Irvine, kicked it past Alex Davies and then dived on it after it had crossed the line.

Shortly afterwards Ben Magee was bundled into touch on his 22, Otley’s high tackle after the line-out giving Harry Oliver the chance to reduce the deficit with a penalty. Otley conceded another two penalties within the next eight minutes on either side of their 10 metre line, for nudging a player in the air and not rolling away, Oliver was on target with both kicks giving Macclesfield a 5-9 lead.

The remainder of the half saw Otley camped in Macclesfield’s 22, Alex Beaumont a persistent threat on the left hand side. Otley did get the ball over the line after a series of pick and goes, but Macclesfield held it up to prevent the try.

The next 40 minutes saw Otley dominate the territorial battle, keeping Macclesfield effectively penned in their half for the remainder of the game. Such was their dominance, Macclesfield did not cross into Otley’s half ‘ball in hand’ once, and were restricted to penalty kicks and the odd high ball to make that journey although their stay was invariably brief. However, their defence was also tenacious and restricted Otley’s ambitions. There was a lapse on 63 minutes when they failed to roll away on their 22, Rowntree going for the three points rather than the corner. Nine minutes later he gave Otley the lead when, having gained a penalty at the scrum on the half way line, the home side got another on the 22 after a high tackle in front of the posts.

Towards the end of the game, Macclesfield did have a brief spell on Otley’s 22 after the home side conceded two penalties. However, as they tried to move the ball towards the centre, Brett Mitchell came out with the ball and passed it to Irvine who calmly kicked it into touch heralding the final whistle.