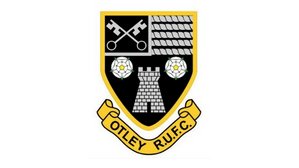 Alex Beaumont celebrated his 99th league appearance with a hat-trick of tries in Otley’s win over Northwich.

On a heavy pitch, Otley were given an early Christmas present when Northwich’s kick-off didn’t go 10 metres. From the scrum, Ben Gould was quick to get the ball out which was then fed to Henry Roberts - he ran around the opposition defence to score after just two minutes. Northwich tried to respond but were unable to capitalise, their attack breaking down when Gavin Stead got the ball his run relieving the pressure. Having got back into Northwich’s half the ball went into touch. From the Otley line-out, the visitor’s moved the ball into the centre onto which Alex Beaumont came into score.

Three minutes later Luke Cole took the ball into the home side’s half, Beaumont then getting the ball to Gavin Stead who scored on the outside. Eddie Crossland found his line to make the conversion, not missing any further conversions in the game. Crossland was involved in Otley’s bonus point try after a scrum, passing to Beaumont to go over just as the first quarter ended.

Three penalties to Otley got them 10 metres out, with the third going into the right hand corner. From the line-out, Otley’s subsequent rolling maul seeing Luke Cole go over. Otley had two further chances to score in the first half, the first being held up and the second would have been a score but for a double movement.

With Northwich down to 14 men following a yellow card, Otley put the ball into the left hand-corner. Simon Willet took the line out and the pack moved forward, Cole going over for his second. Although both sides were down to 14 after a high tackle, it didn’t stop Otley adding to their tally when they moved the ball out wide for Marcus Law to score. With both sides back to full complement, the rain had returned making playing conditions more difficult. On the hour Northwich knocked on in their 22 and from the Otley scrum, the ball went out left to Beaumont who dotted down for his third.

Otley’s final try came after a succession of penalties that put Otley close to the line. Whilst they lost the ball and conceded a scrum, With three minutes to go Otley were able to push Northwich off the ball, Ben Gould grabbing the opportunity to score his first try for Otley.