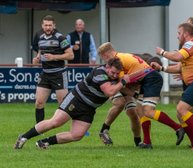 Jason Moss was applauded as he led out his team mates on Saturday in appreciation of his 150th league game for Otley.

Otley kicked off and were soon on the offensive. Henry Robert’s run from his 10 metre line to Wirral’s 22 was stopped, but the visitors were penalised for not rolling away. Joe Rowntree stepped up to give Otley a 3-point lead after 3 minutes. Six minutes later he was at it again, his penalty taking his points tally so far for the season to 100 points.

Wirral’s Matt Deehan took the play up to Otley’s 10 metre line before being tackled, and the visitors recycled the ball to apply pressure and then gained a penalty. Going for a scrum instead of 3 points, they continued to pressurise Otley’s line until a loose pass was dropped, Finn Dewar hacking the ball three times, supporting Henry Roberts giving the ball back to Dewar who went onto score a converted try. Luke Cole took the ball from a Wirral line-out and went forward, Tom Cummins taking over and from there his teammates looked for that elusive opening. It came when Callum Irvine went through from 10 metres out, Rowntree’s conversion taking his overall points tally to over 400.

Despite being 20 points down, Wirral were still a force and their forwards were camped in Otley’s red zone. Mike Bryne was held up short but a couple of moves later Matt Deehan went over close to the posts, Craig Harvey converting. Parity was restored when, after the kick-off Wirral started to work their way forward, a loose pass was intercepted by Dan Preston-Routledge 25 metres out and he touched down under the posts, the try being converted by Rowntree.

The second half saw Wirral playing strongly, helped in part by Otley conceding a series of penalties. Having been given another penalty in front of Otley's posts, a quick tap and go enabled Mike Bryne to burst through, Craig Harvey adding the conversion to make the score 27-14.

Otley fought back and, having put a penalty into the left hand corner, Ben Waddington went over in the corner after his team mates had moved the ball into the centre and back again. Wirral came back and had two players held up inches from line, Luke Cole tackling Chris Crowley into touch, and a further attempt being halted after two players crossed. Stout defending by Otley kept Wirral out and two minutes from the end Henry Roberts intercepted a pass, outpacing the Wirral players to run some 70 metres to the try line which Rowntree converted.

In the dying moments Wirral were again in Otley’s half but were penalised, allowing Otley to kick the ball to safety.