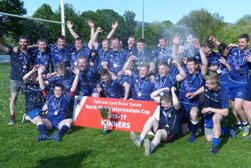 Dolgellau have finally won a North Wales Knock out Cup for the first time in their history ! [They have come agonisingly close twice in recent finals. Nant Conwy in the senior cup in 2015, and Denbigh in this, the Intermediate Cup, two years ago, losing both by a single point], but they produced a magnificent second half performance here at Cae Ddol, Rhuthun, to run out worthy winners, after trailing their local rivals, 11-3 at the interval.

Cobra looked the more comfortable side in the opening exchanges, and went ahead with stand-off, Rhodri Jones, putting over a penalty after twelve minutes. Three minutes later, Cobra flanker, Lee Hughes gathered a high up and under deep in Dolgellau territory, and subsequent drives saw wing Richard Noakes touchdown and make it 8-0. Cobra were very effective at the breakdowns and forced Dolgellau turnovers on a regular basis. Dolgellau stand-off, Dafydd Roberts, put Dolgellau on the score board going into the second quarter with a penalty, but they could not build on this and Cobra were good value for their lead, that was increased to 11-3 on the half time whistle with Rhodri Jones’ second penalty.

The turning point came a minute into the second half, when Cobra were reduced to 14 men for a yellow card for a needless challenge on Dolgellau flanker, Iwan Pugh. Replacement Henri Roberts put over the penalty and two minutes later Dolgellau were level. Henri Roberts and full back, James Owen breaking deep into Cobra 22, with wing, Rob Pugh darting over on the left corner flag for the try, after taking a swift pass from stand-of Jac Roberts. Dolgellau took the lead after ten minutes, with Henri Roberts’ second penalty and they were now in command. Five minutes later, second row, Marius Jones’s storming run saw hooker, Eon Williams, on his shoulder in good support to go over for Dolgellau’s second try. Henri Roberts converted for a 11-21 lead.

Replacement prop, Greg Smithies, and Henri Roberts, again, set up centre, Carwyn Pugh for Dolgellau’s third, and straight from the kick-off, scrum half, Lewis Jones, and Eon Williams moved swiftly down the right touchline, that eventually saw replacement wing, Jake Hinge go over in the left corner to make the score 11-31. Dolgellau’s speedy threequarters were now in full-flow, and wing Rhys Lewis set up Henri Roberts who sprinted clear from halfway, for Dolgellau’s fifth try, to seal a memorable come-back and historic victory by 11-36.