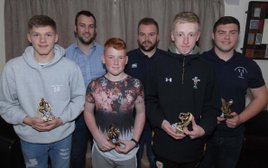 Dolgellau Rugby Club held the presentation night for up and coming junior players at the Marian last Friday evening. Under 12’s, 14’s and 16’s were all honoured for their achievements throughout the season at a packed Marian clubhouse.

The best Ruck was won by Erin Lloyd, with Mari Hughes being awarded the Spirit of Rugby 2019 and Dicw Pritchard the Dolgellau Under 12s Player of the Year. The under 12’s coaches this season were Richard Ellis Williams, Richard Jones and Alaw Sharp.

Under 14’s coaches Gareth Rodgers, Roy Parker and Geraint Evans presented the awards. Morgan Yorke was Players Player, Guto Childs Player of the Year,
Alex Parker Most Improved and Elis Williams on behalf of Rugby Rocks Team for The Most Committed.

The Under 16’s squad were lucky this season to have two experienced players from the clubs first team coaching the squad. Eon Williams and Marius Jones.

Jamie Jones was player of the Year and Gareth Jones Players Player. Dion James won the Try of the Season, Ben Williams Most Improved Player and Ryan Jones the Captains Trophy.
Thanks were given to all the coaches, parents and players with a big thank you to club official Clare Jones for her tireless efforts on club duties. She even cooked the sausage and chips for the night…. Well done Clare….!!!