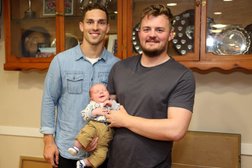 People across Anglesey, and much of North Wales, were devastated to hear news of the death of Huw Gethin Jones, 34.

Rugby legend George North is among those who have paid tribute to a young dad who was hoping to return home this weekend after battling Covid.

Huw Gethin Jones, a hugely popular figure on Anglesey, messaged his friends from hospital on Wednesday saying he was feeling better and was looking forward to being back home in Llynfaes, near Llangefni.

Sadly, on Friday, the 34-year-old died from complications caused by the virus.

Tributes for Huw have poured in from across North Wales, many from rugby clubs shocked by his untimely death.

Until recently, he was a star player for Llangefni RFC’s first team, a second row forward who was nicknamed “Huw Stretch” not only for his height but because of his expertise in the line-out.

As one of a group of players responsible for establishing a Premiership rugby team in North Wales, his passing drew a heartfelt response from Wales rugby star George North.

On hearing of his death, he tweeted: “Such sad news. I’m so sorry to hear this. My thoughts are with his family.”

A talented musician who worked as a TV editor for Rondo Media in Caernarfon, Huw was also an entrepreneur, founding craft brewery Bragdy Mona with six friends.

He leaves wife Teleri, a GP, and two young children, Gwydion, 3 and Math, 1.

Like many others on Anglesey, Ynys Môn MS Rhun ap Iorwerth was quick to express his shock and sadness at Huw’s death.

“This is a cruel virus,” he tweeted.

“Care for each other, and do what’s right to keep others safe.

“My deepest condolences to those who are grieving.”

On Saturday a fundraising page was set up to raise money to support Huw's family now and in the future.

Organiser Manon Dafydd said a “wave of sadness” had engulfed his family, colleagues and many friends.

Within four hours the appeal, on the GoFundMe website, has reached an astonishing £10,000, double the target.

Manon spoke of how Huw’s infectious personality would “fill the room, always full of fun and telling stories”.

A similar tribute was paid by Simon Jones, chairman of Llangefni Rugby Club.

Huw had been a popular fixture there since rising through the junior ranks, at one time coached by Steve Kieran, who himself died just before Christmas.

For many years he was a stalwart of the first team.

His father, Dafydd, was a former chairman of the club, and is now president, while his brother and “best friend” Rhys coached the youth team.

Dafydd Jones, married to Ellen, was succeeded as club chairman by Morgan Evans auctioneer Simon Jones, who said the entire club had been deeply saddened by Huw’s death.

“Huw was universally popular, very eloquent and hugely knowledgeable about all things but especially rugby,” he said.

“He was always very pleasant with people and could strike up a conversation with anyone.

“Our thoughts are with his family. Speaking to them, I know they have been very touched by all the messages of support and condolences that have been sent to them by rugby clubs right across North Wales.”

He was a member of the choir Hogia Llanbobman, and a guitarist and vocalist with rock band #Band6, performing both at rugby clubs and weddings.

Among Huw’s many interests was brewing. He was to become a driving force of the Bragdy Mona brewery, established with six friends after he impressed them with his home brews in a series of late night “tasting sessions”.

They were old school friends in their 30s – five of them members of Hogiau Llanbobman – who each each committed around £5,000 to set up the brewery on Gaerwen Industrial Estate.