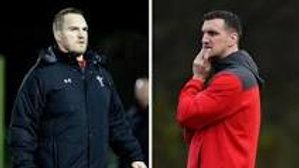 Jenkins is one of Wales’ most decorated former players who amassed 129 caps for his country, winning four Six Nations championships, including three Grand Slams and toured with the British & Irish Lions on three occasions.

Since retiring from the game in 2018, Jenkins moved into coaching, taking up roles with Cardiff Blues and Cardiff RFC. He has worked with both the age-grade and senior sides at Cardiff Blues and more recently was defence coach for Wales U20. He will now link with the national squad as part of Pivac’s coaching team on a full-time basis.

Warburton began his role with Wales last November, working on a campaign by campaign basis and has decided he needs to spend more time on his other commitments away from coaching. Jenkins began his role at the start of the autumn campaign, working alongside Warburton for a short hand-over period.

Wales head coach Wayne Pivac said: "I’m delighted to be welcoming Gethin into the coaching team, he has vast experience of the international game and is hugely respected. Since retiring he has built a great reputation as a coach and has worked across different levels and age-grades of the game, most recently working alongside Wales’ U20 side.
"Gethin will be a great addition to the coaching team and will compliment Byron extremely well in their respective roles and I’m looking forward to working with him.

"I’d like to thank Sam for his hard work over the last year and what he has given to the team and to Wales. I would like to thank him for his honesty regarding his future and the need to spend more time on other projects away from the game and wish him all the best in that."
Jenkins said: "I would like to thank Richard Holland, John Mulvihill, and Gruff Rees for giving me the opportunity to start my coaching career at Cardiff Blues. I would also like to thank Steve Law at Cardiff RFC for giving me free rein to experience preparing a team on a week to week basis.
"I’m relishing the opportunity to get stuck into the international environment, working with quality coaches and players at the top of their game.

"I’m well versed on the demands of the international game and I’m looking forward to offering my input and where I can add to the environment."

Warburton said: "I would like to thank Wayne and the coaching team for the opportunity I’ve had. I’ve thoroughly enjoyed my time with them and I’m excited for the future for the national team.

"For me personally, I have had time to reflect and plan during the lockdown and I feel with a new addition to my family and business interests away from coaching, I can’t devote the time needed in the role and so have decided to step away from coaching.

"What Wayne and his team are building is hugely exciting and I wish them all the best for the future."

WRU Group Chief Executive, Steve Phillips, added: "I would like to thank Sam for his work with the national squad and welcome Gethin back into the set-up. He brings a wealth of experience and knowledge and has built his coaching career across the age-grades and pathway at Cardiff Blues and with Wales U20. I would also like to thank Cardiff Blues for accommodating this appointment and wish Gethin a successful career with Wales."