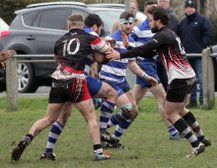 Llandudno were first with points on the board with an unconverted try from centre David Davies after 10 minutes in this Conwy Landrover North Wales Plate semi final against Ruthin.

The Blues responded and after a period of pressure got their reward when No 8 Arwyn Davies went over the whitewash for a try also unconverted.

Within 5 minutes Ryan Pike had regained the lead for the home side with a penalty goal.

The game remained competitive until half time with both sides looking dangerous in the opposition’s 22 but prone to conceding penalties and losing possession and the whistle blew with the score 8-5 to Llandudno and all to play for.

Tudno started the 2nd half with some urgency and within a few minutes went over the try line from a lineout with Nick Earlam claiming the honours and Pike converting.

The home side went further ahead with a penalty goal and the game became somewhat of a dour struggle for a while before Llandudno’s Byron Davies got their third try as the pack pushed over the line from a scrum.

Ruthin were down to 14 men because of a sin bin and struggled to contain Llandudno’s strong running but with a great individual effort fly half Nathan Jones scored between the posts and converted his own try to put the score at 23-12.

The last 10 minutes however belonged to the home side and with the Blues conceding more penalties Pike’s sure foot made the most of these, kicking two further goals and the game ended with Llandudno winners at 29-12.