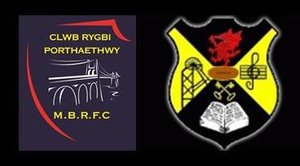 What a difference a week makes. Last week, Bridge managed a solitary try, whilst this week they ran in nine! Coach Keith Withers had asked his team for a performance and they duly obliged.

Rhos were very competitive in the early exchanges and, from the kick off, pressed Bridge hard. It took the home team ten minutes to break out and open the scoring. Some fast phase play saw the ball spread out wide, where number eight Chris Roberts was lurking and raced over in the corner for a fine try converted by Dion McGrath. Rhos soon responded and their left winger Connor Walton went outside his defender for an excellent try. The conversion was missed, leaving Bridge ahead. Bridge then built a healthy lead. Flanker Robat Jones emulated his back row colleague with a try in the same corner. Scrum half Ed Williams was quicker than the visitors, taking a tap and roaring through the napping defence for a try. Centre Vaughn Francis ran a clever angle against the grain of the defence to bring up the try bonus point. Ed Williams then put in a crafty chip, gathered by Winger Logan Jones, who fed his captain McGrath who scored the fifth try of the half for Bridge. The score closed at 29 to 5 at the interval.

Bridge continued from the restart in the same manner, with Ed Williams scoring under the posts, following some clever interpassing between winger, full back and scrum half. Rhos then rallied using their forwards to probe the Bridge line and they were finally rewarded when scrum half Mark Price went over from close range. Dan Hughes, who had made good ground from full back all afternoon, nearly had his moment of glory; his incisive run took him over the try line only for him to become entangled with a defender so that he couldn't ground the ball. Fortunately for Bridge the ball went backwards and second row Rhys Thomas scooped it up and jogged under the posts for a real poachers try. Bridge continued to play the game at a high tempo which led to a try for Dave Williams, cutting in from his outside centre channel to outpace the Rhos defence. The final try of the match was scored by replacement Marc Dawson on his return from injury and with the conversion from McGrath the match closed at 57 to 10.

Bridge travel to Holyhead next Saturday, for a much awaited island derby.